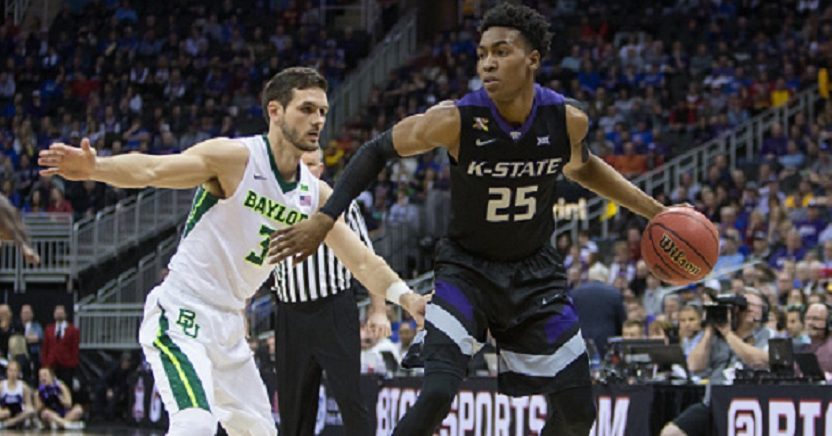 Championship Week has already brought a handful of upsets and big matchups, shaking up the field in the last few days. We’ve got potential big stealers in TCU and Cal, and Friday will also feature a few marquee opponents going head-to-head with big seeding implications.

We’re now down to the last three days of conference tournaments, so let’s take a look at how the bracket is shaping up entering the weekend.

The bracket holds 32 automatic bids for conference champions (noted below with italics), and the remaining 36 are at-large selections. Teams are evaluated by how they have performed to this point in the season without projecting how they will perform the rest of championship week.

Here’s the full field of 68 through results of March 9 with some notes and analysis on the bracket below.

** The biggest winner of championship week so far is Kansas State. The Wildcats upset Baylor on Thursday night to move from the first team out to the top team in the First Four and knock Illinois State out of the field. They should be safe as the Big 12’s sixth bid regardless of what happens this weekend.

** Syracuse is rooting hard against Rhode Island, Indiana and TCU. The Rams and the Hoosiers would pass the Orange by making their respective conference championship games. The Horned Frogs will need to win the Big 12 Tournament to make the field, but at this point they’re just two games away with the top two seeds already eliminated.

** Once in the running for a No. 1 seed, Baylor is down to my worst No. 2. The Bears are still in good shape to get geographic preference in Tulsa for the first two rounds, but there’s a good chance they’ll get sent to the East or West Region.

** Some people like Houston’s chances, but I’m not with it. If you’re going to hate on Syracuse for its best road wins coming against Clemson and NC State, what’s so great about Houston’s best wins away from home coming on neutral sites against Vermont and George Mason?

** Iowa and Illinois’ resumes are worthy of the fourth and fifth spots out, but neither has a chance at actually earning a bid after losing in the Big Ten Tournament on Thursday.

Michigan vs. Purdue — Purdue is the Big Ten’s best hope for a top four seed, and the Boilermakers will need this one to stay in the running.

Indiana vs. Wisconsin — After thrashing Iowa, the Hoosiers need one more win to become a serious contender for a bid.

Vanderbilt vs. Florida — Vandy should be fine at this point, but a third win against Florida would seal a berth.

Duke vs. North Carolina — Duke could still play its way up to a No. 2 seed, and UNC is trying to hold onto its No. 1.

Kansas State vs. West Virginia — Similarly to Vanderbilt, Kansas State should fine no matter what, but one more victory would put all doubt to rest.

Notre Dame vs. Florida State — Another ACC semifinal with big seeding implications as I have these two teams separated by just five spots on my 1-68 list.

UCLA vs. Arizona — The winner of this semifinal game gets a Pac-12 finals berth, which could be a winner-takes-a-1-seed game.