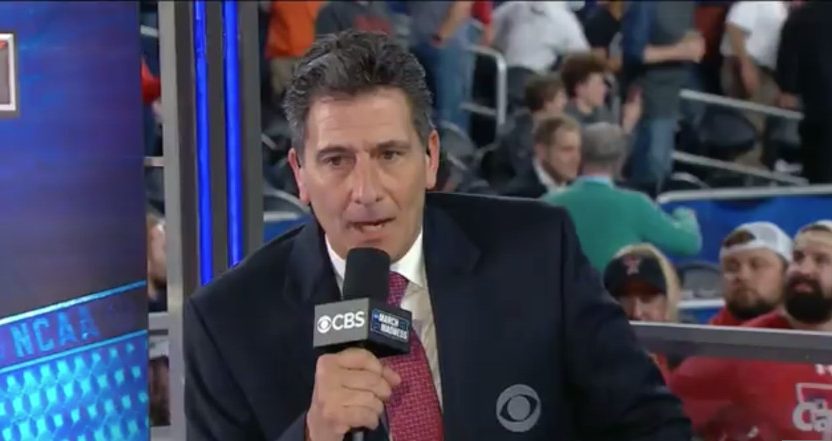 The crazy ending to the Auburn-Virginia men’s basketball Final Four game Saturday saw a lot of immediate focus on the final foul call that sent Virginia’s Kyle Guy to the line, where he made three free throws to give the Cavaliers a 63-62 win. However, afterwards, the discussion quickly shifted to a missed double-dribble call on Virginia’s Ty Jerome the previous play that would have given the Tigers the ball back. The first on-broadcast mention of this came from CBS rules analyst Gene Steratore, who Jim Nantz brought in for comment after the final free throw, after Auburn’s subsequent miss, and after Tracy Wolfson’s on-court interview with Virginia coach Tony Bennett. Here’s what Steratore said there:

This then produced a lot more discussion. The CBS/Turner post-game panel discussed it a bit partway through their breakdown of the game, generally saying it should have been called (albeit with Charles Barkley saying “I didn’t even know that rule”), but not being too highly critical of the officials who missed it:

The officiating criticism then escalated thanks to a surprising source; boxer Deontay Wilder, who appeared with Greg Gumbel to promote his upcoming fight on Showtime, but first talked about rooting for Auburn thanks to his connections to the state of Alabama (even if he grew up in Tuscaloosa, home of the University of Alabama), and then went off on the refs.

CBS then brought Steratore to the post-game show set to break down the missed double-dribble call further:

Johnson then asked Steratore why no one caught it live, and he said “It’s very unusual. I think what happens most times when you have a deflection off a back heel or something, that basketball goes a lot further than just a bounce or two away from your body. So I think for that reason, and as we watched it in live action, it didn’t jump off the screen at any of us either, truthfully, right?” Clark Kellogg then said “Yes, that’s exactly right.”

And even noted Auburn fan Barkley said “I always try to defend officials…I don’t think I’d ever miss a call if I had instant replay and a big 50-inch screen at home” before saying Virginia still deserves credit for the win and finishing “Man, I want to cry right now.”

All in all, CBS seemed to handle this pretty well. The delay in first bringing it up may be cause for some questions, but we don’t know at what point Steratore flagged it to producers; his comments later include that he didn’t catch it at first either. And it’s at least somewhat understandable how it wasn’t caught by the officials; this was a frantic situation with a lot going on, and live, it might have been thought that the ball hit an Auburn player (which would allow for the resumption of a dribble). Plenty of fans didn’t catch it live, similarly to the analysts involved here. (And credit to them for admitting that.)

This also showed just how good of a decision it proved to be for CBS to use Steratore as a rules analyst for this tournament. He’s made some key contributions so far, and his past work as a NFL and NCAA ref seems to have made him quite comfortable talking to a large audience. He also seems to get what’s needed from a TV rules analyst; being quick, to the point, and definitive one way or the other. CBS brought him in last summer as both a NFL and NCAA rules analyst, and that move has paid off. Having a knowledgeable official who could clearly explain the rule in question here, and having him able to appear on set as well as just as a voice on the broadcast, made the on-air discussion of this missed call much better than it likely would have been otherwise.