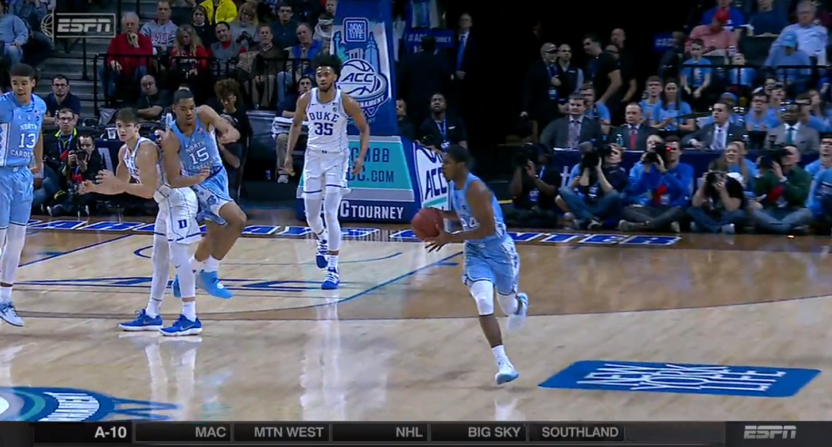 In shocking news, Grayson Allen did something stupid and dirty on the court last night, hipchecking North Carolina forward Garrison Brooks as the Tar Heels broke in transition.

Grayson Allen was called for a Flagrant 1 for an intentional hip check: pic.twitter.com/wjCqHlcMOG

This wasn’t really surprising; Allen has a history of dirty and dangerous play. Last year, after he tripped an Elon player in fairly egregious fashion, Mike Krzyzewki attempted to head off conference punishment by announcing an “indefinite” suspension for Allen, which lasted all of one game.

That was blatantly enabling from Coach K, so much so that I wrote this at the time:

Not to clutch any pearls, but what if Steven Santa Ana had landed awkwardly and sprained an ankle, or tore up a knee, or been injured at all? Sending an opponent to the floor via a trip isn’t that different from a shove.

But as with the other two identical incidents, Coach K seems to be content to let it slide. He didn’t even bench Allen for the remainder of the game. Krzyzewski seems to be daring the ACC to suspend Allen. It’s ridiculous behavior for a coach with Krzyzewski’s stature, and it’s just as arrogant as when he admonished Oregon’s Dillon Brooks after Duke’s NCAA Tournament loss last season, and then lied about it to the press.

Grayson Allen has cultivated his own reputation, and he’s living up to it. That’s on him, and he’ll have to suffer the consequences.

So, faced with another incident with fairly obvious intent, did Coach K finally admit to reality?

“I was surprised there was stoppage,” said Duke coach Mike Krzyzewski. “But we’ll go with the call and move forward.

“… Do you think that was the only time someone was hipped in the game? If you look in the low post, that’s going on all the time. So it happened at half court, they got it, it’s done. That didn’t win or lose the game.”

That’s absurdly arrogant. Does Coach K honestly not think we know the difference between players banging for position down low and a cheap shot block as a player is running up the court? He was surprised there was a stoppage?