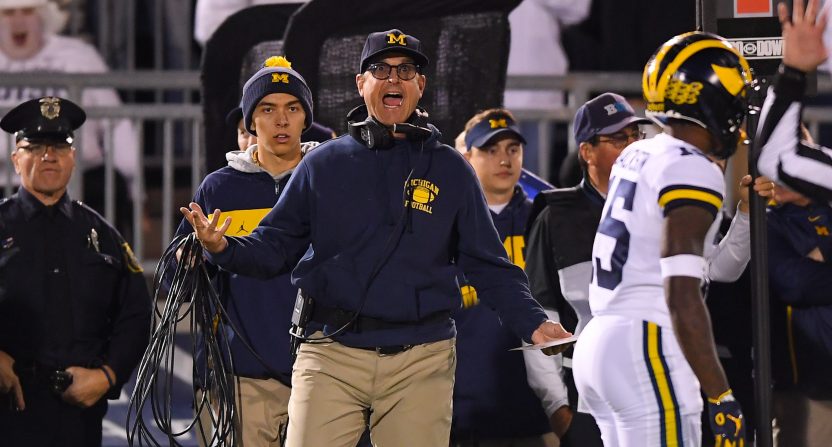 There are many people who have not acquitted themselves well in the weeks since the COVID-19 Pandemic effectively shut down daily life as we know. Among them are some of the nation’s top college football coaches. Whenever one of them starts talking about the pandemic’s meaning and whether or not the 2020 college football season will happen, nothing good seems to come out of their mouths.

Clemson Tigers’ coach Dabo Swinney made headlines when he told reporters during a conference call that he had “zero doubt” college football would be played soon and jingoistically referenced World War II in regards to the pandemic.

I don’t have any doubt… I mean I have zero doubt that we’re going to be playing. The stands are going to be packed and the Valley is going to be rocking. zero doubt. That’s the only thought I have, right there. All that rest of the stuff, I don’t think about any of that.

“I mean, this is America, man. We’ve stormed the beaches of Normandy, we’ve sent a car that’s driven around Mars, we’ve walked on the moon. This is the greatest country and the greatest people in the history of the planet…Listen, we’re going to rise up and we’re gonna kick this thing right in the teeth and we’ll get back to our lives.”

Swinney, who is not a health expert in any way, also traveled by private plane at a time when Americans were being told to shelter-in-place and self-isolate, and also said he had plans to do it again this weekend. When pressed about it, Swinney indignantly blamed “negativity” instead of taking any kind of responsibility.

Then there was Oklahoma State’s Mike Gundy, who told reporters that he thinks players should be brought back together for practice now, and that even if they contract the virus they will be fine because “they are healthy and have the ability to fight the virus off.”

Is Mike Gundy aware of what he is saying here? pic.twitter.com/rjWUK6LM7W

After receiving some understandable pushback on his uninformed opinion, Gundy came out days later with the classic non-apology apology.

“I have been made aware that comments from my press conference have offended some. It was never my intention to offend anyone and I apologize. My first priority is and will always be the student-athletes and doing what is best for the program and the university.”

No one asked new Mississippi State coach Mike Leach about his opinion on the virus (thank god), but that didn’t prevent him from tweeting a photo of a woman knitting a noose, not exactly the kind of thing that is looked well on anywhere, especially the SEC. In the wake of that, two players announced they would transfer, at least one of which was doing so in part because of the tweet. Leach also offered up an “I had no intention of offending anyone” non-apology, and the school announced that Leach would participate in listening sessions “with student, alumni, and community groups and to provide the coach with opportunities to expand his cultural awareness of Mississippi.”

And that brings us to Michigan’s Jim Harbaugh, who appeared on a National Review podcast with friend Jay Nordlinger. For the most part, they discussed normal things you’d expect a football coach to touch on. And then the topic of the pandemic came up and the wheels came off.

“Now with the COVID-19 I see people more concerned about others and more prayerful,” Harbaugh said. “As I said, God has virtually stopped the world from spinning. I don’t think it’s coincidence, my personal feeling, living a faith-based life. This is a message — this is something where, a time we grow in our faith. Having reverence and respect for God. You see people taking more of a view of sanctity of life and I hope that continues — and not just in this time of crisis or pandemic. And lastly, abortion. We talk about sanctity of life, yet we live in a society that aborts babies. There can’t be anything more horrendous.”

What does abortion have to do with…you know what, nevermind.

The question of whether or not college football will return in September remains to be answered. Until then, here’s to hoping that none of those answers come from college football coaches. The less we hear from them between now and then about, well, anything…the better.