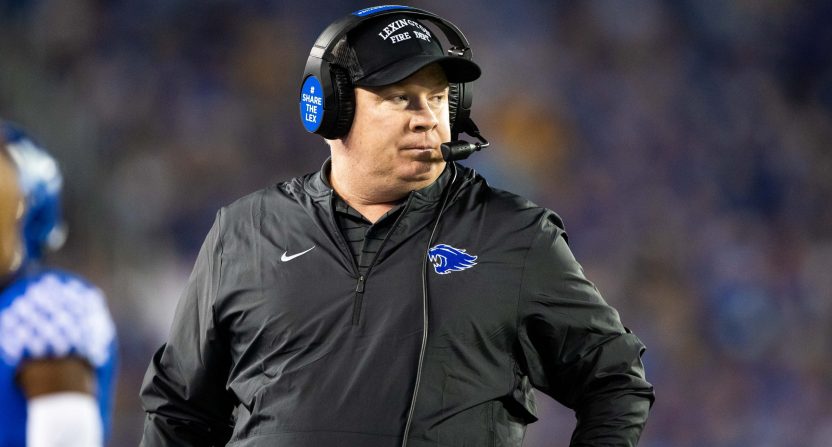 Maybe Mark Stoops is perfectly content. Perhaps he’s happy being the University of Kentucky football coach. He’s been in Lexington since 2013, making him the second-longest tenured in the SEC. Only Nick Saban at Alabama has lasted longer.

That is a laudable accomplishment in the conference where It Just Means More. The SEC is a grinder of expectations that can crush anyone’s spirits. Who would have guessed that Stoops would outlast LSU’s Ed Orgeron? Heck, it wasn’t too long ago that Kentucky wasn’t even the best football program in its own state.

Under “regular” (and unreasonable) SEC standards, Stoops might have been ousted years ago. He’s had four losing campaigns in nine seasons and has reached double-digit victories just once (10-3 in 2018). His career record is 55-52. A 51.4-winning percentage would normally get you fired in the SEC. But Kentucky is a basketball-first school. Goals are achievable. Get to a bowl game regularly and you’ll keep your job.

Stoops, through sheer effort and smart recruiting, has made the Wildcats relevant. They’re ranked and opened the season 6-0. That was their best start since 1950. Back-to-back losses to Georgia and Mississippi State have tempered the excitement a little, but there’s still plenty to celebrate. And all this winning has put Stoops on the national radar for job openings. He’s been mentioned as a candidate at LSU and USC.

This might be as good as it gets for Stoops. This might mean it’s time to leave.

Odds to be the next LSU Head Coach per @betonline_ag :

There’s a ceiling on Kentucky football. As good as the Wildcats are, they will never be a regular national championship contender. There’s a pecking order in the SEC: Alabama, Georgia, LSU, and Florida are all bluebloods. And winning the toughest conference in America is going to be more difficult when Texas and Oklahoma join in the near future. At best, Kentucky would be the seventh-best program in the league.

The list of schools across that country that can win it all in any given year is small. There’s a reason you always see the same names in the four-team College Football Playoff. Since the inaugural 2014 season of the CFP, a grand total of 11 programs have participated. Only five have made multiple appearances: Alabama, Clemson, Ohio State, Oklahoma, and Notre Dame.

That’s a staggering lack of parity. Yes, CFP expansion is on the horizon. It could be feature anywhere from eight to 12 teams in the postseason. However, college football will never be what college basketball is when it comes to equal access to a championship tournament.

Stoops, of course, is aware of this. He’s been at football-first schools before. He was an assistant at Miami and Florida State. If Stoops wants to win at the highest level, he’d be better off at a tradition-rich program. And there are great jobs out there: LSU and USC being at the top of anyone’s lists. Others might come open like Nebraska or Miami. And there could be some surprises. Dan Mullen has had success at Florida, but a 4-4 record and his recent comments on recruiting have the fanbase grumbling.

Stoops has danced around the speculation. He’s even been asked about Miami, which still has a coach in Manny Diaz. He responded by saying: “I’m not getting into that. I would rather have it this way than saying you are trying to run me out of here.”

Now, Stoops has turned down big jobs before. He reportedly interviewed for the Florida State gig and declined. The Seminoles wound up hiring the embattled Mike Norvell from Memphis. However, it’s hard to imagine Stoops rejecting either LSU or USC. He might not get offers like that again. At either place, he would have access to fertile recruiting grounds that regularly produce NFL talent. He would have a sizable budget and the clout to build the type of program most coaches only dream of.

In less than five years, Stoops could create a viable national championship contender. To do so, he would have to leave his comfort zone. Bolting from Kentucky wouldn’t be an easy decision. When he took over the Wildcats when they were one of the worst Power 5 jobs in the nation.

“I’ve said it since Day 1, when I talked about taking it to national prominence when I got here, people laughed at me,” Stoops, 54, said earlier this season. “But we’re on our way. We’re taking steps, building blocks. It’s not easy. … We have no intention of slowing down.”

Admirable words. But if LSU, USC, or any other school with an established pedigree comes calling, it might be time for Stoops to leave Lexington.