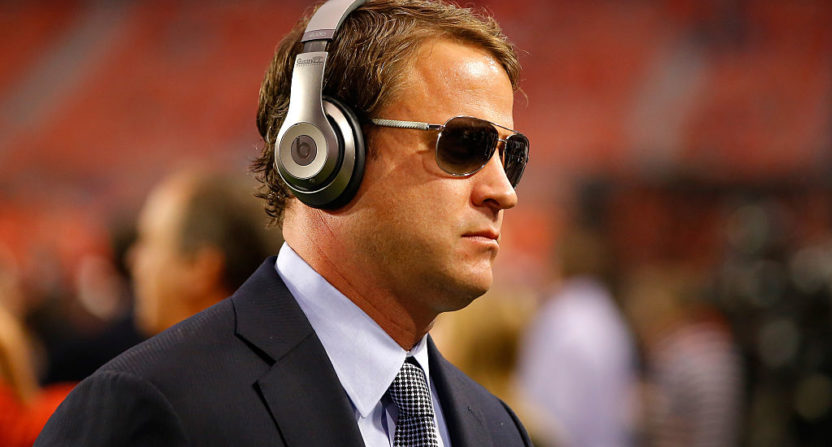 Don’t look now, but Lane Kiffin is back as a head coach in the Football Bowl Subdivision. His career has been marked with the good, bad, and a lot ugly. Now, at long last, he has a second chance at a place that can only be seen as a stepping stone. But what does it all mean?

Lane Kiffin. What comes to mind when they think of the much-maligned career coaching nomad differs for many, but there is no doubt he’s one of the most polarizing football coaches in the modern era.

From a fast-track climb to an NFL head coach, to the almost as brisk decline to a journeyman looking for a drink of water in the coaching profession, the stories are almost endless, comical, and sometimes range inducing for those in the wake of where he has been.

And now Kiffin has resurfaced as the man in charge at Florida Atlantic. Buckle your seat belts, secure the valuables, and keep your hands inside the ride at all times, Owls fans. There’s a good chance the journey will have some bumps at times, as well as some unpredictable twists and turns.

To think that the 42-year-old Kiffin has somehow made his way to Boca Raton, Florida is left with some bewilderment in itself.

Not to take anything away from the Owls program, but with a resume that shows head coaching stops with the Oakland Raiders, USC, Tennessee, and most recently offensive-coordinator at big, bad Alabama, something seems a bit amiss.

So the question is, is Kiffin running towards something, or away from ghosts?

Just think about the head coaching jobs that were up for grabs in the offseason. None of the trio of Oregon, Baylor or Texas picked up the phone to gauge interest from Kiffin, and despite multiple rumors, the Houston Cougars decided to go safe and hire within with Major Applewhite. Ditto on USF.

You could make a case for staying put at Alabama as the offensive coordinator being the better decision, but you get the feeling that was going to end in a messy divorce based on what we saw and heard coming from the sidelines in Tuscaloosa.

It’s Not as Bad as it Seems

But look, it’s not all bad here. And no, we’re not talking about the sunshine and beaches the Kiffin family can take selfies with.

Conference USA is wide open. The reigning champs are in flux with former Western Kentucky head coach Jeff Brohm moving on to Purdue. Marshall isn’t the Marshall we’re used to seeing anymore, and the rest of the league looks more like a revolving door than a hierarchical diagram.

What’s more, there are some good players who have been building towards something at FAU, and you could do a lot worse than picking up some recruiting scraps from the talent-rich state of Florida. In fact, you’d like to think that Kiffin could open more doors as a name-brand coach for the Owls than his predecessor Charlie Partridge could.

And that points exactly to what this arrangement is. The administration at FAU wants a proven name to take the program to the next level, while Kiffin wants to prove that he still has the ability to recruit and put a winning product on the field so that he can move on to a place to fit his ego. Calling it anything different would be nonsense no matter what side it comes from.

If it’s not a short partnership, then it’s probably a failure. But will it work?

There is reason to think that it might. Kiffin won’t be in a fishbowl like he has at almost every stop in his career. If he leaves the program much like he did as a thief in the night at Tennessee, would anyone blame him? The administration at FAU will likely give him more freedom to run the program as he wants, meaning less clashes like what occurred at USC and with the Raiders. And, he won’t have to report to an Alpha Male head coach.

Out With the Old

But things have to be different. Kiffin has to show that he’s matured in his interactions with media and with coaching colleagues. He must tone things down. My intuition says that he has, as evidenced by the way that he handled the bizarre departure from Alabama, but time will tell. Already on the job in Boca Raton, he’s made some interesting news.

These types of stunts (if that’s what you want to call them) might actually be good for recruiting and exposure at a place like FAU, but it’ll continue to give big-time college administrators pause when it comes to hiring a new face for the program.

However, winning — and winning big — can cure all. Basically, Kiffin needs to take notice of the blueprints that Jeff Brohm, P.J. Fleck, and Tom Herman have shown, then rinse and repeat. We’ve also seen Michigan put up with some of the baggage that goes along with Jim Harbaugh, but we’ll see how that continues to go if Mr. Khakis doesn’t start winning in a bigger fashion soon.

It may be the doldrums of early summer now, but before you can say Al Davis, it’ll be time to turn it up on fall camp. Shortly thereafter, Owl fans will begin to see more than what has been left by Lane Kiffin’s contrails each stop he’s jettisoned through. They’ll see a real, live product on the field.

It’s either going to be life in the fast lane, the slow lane, or just plain old Lane.

1 thought on “He’s baaack! Lane Kiffin is about to take FAU by storm”