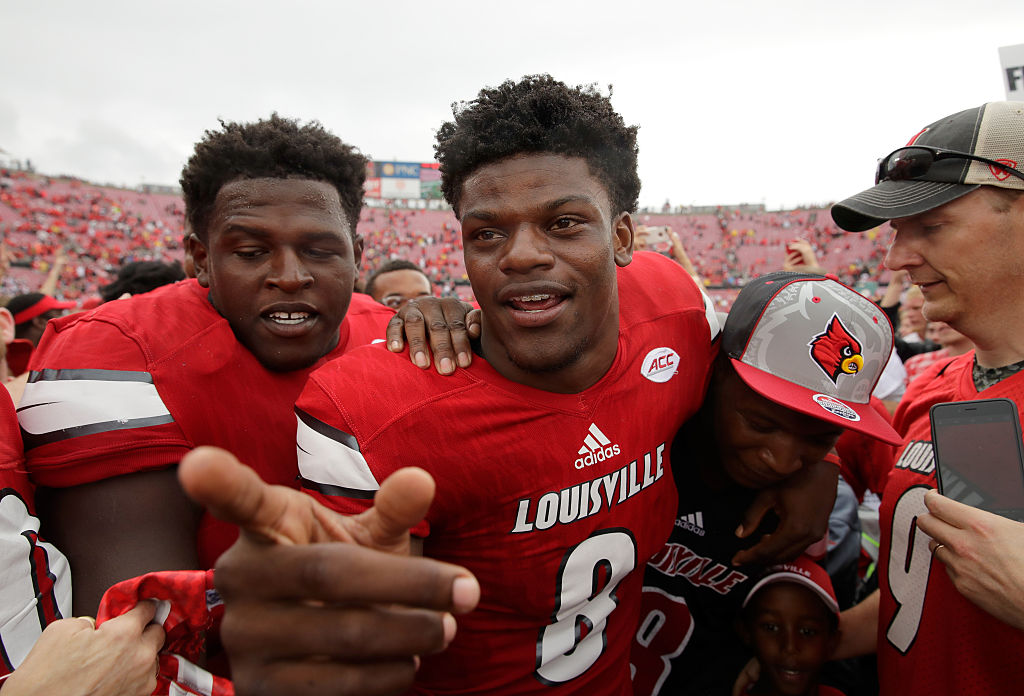 Lamar Jackson, a weapon with nuclear capabilities, is unlike anything University of Louisville football has ever had. He’s a talent rarely seen in college football and Louisville is lucky to have him. Jackson’s wizardry makes it even more confounding to see what has happened to the Cardinals (4-3, 1-3 Atlantic Coast Conference).

Jackson can throw. Jackson can run. Jackson can almost do it all. But he can’t tackle, cover, coach or make up for the litany of issues plaguing his team. It’s astounding. Losing to ranked foes like defending national champion Clemson and N.C. State is one thing. Losing at home to Boston College 45-42 is DEFCON One.

And if you don’t think it can’t get worse for the Cardinals, look at the schedule ahead: at Florida State, at Wake Forest, home against Virginia and Syracuse and at in-state rival Kentucky. It’s not inconceivable that Jackson could become the first returning Heisman Trophy winner NOT to play in a bowl game.

Jackson didn’t sign up for this. But that could be a part of his legacy in what will likely be the junior’s final college season before he departs for a career in the NFL. Maybe Jackson can overcome a defense that is as impervious as a colander. With a little luck, he could get the Cardinals to an 8-4 regular-season record.

Regardless, his junior season seems like a waste for a generational talent.

This season was about Louisville trying to recapture the magic of its 9-1 start last season. It was a contender for one of the four playoff spots before collapsing down the stretch. Yes, this year’s Cardinals lost some talent but it was picked to finish third in the ACC Atlantic behind Florida State and Clemson. Right now, Louisville is tied for last with the team it just lost to.

Against Boston College, Jackson accounted for 512 yards and five touchdowns – and that wasn’t enough. Louisville is 4-6 in Jackson’s last 10 starts. That’s not only unbelievable, it’s unacceptable. If this were an action movie, Jackson could single-handily defeat all comers. Jackson isn’t John Wick. Louisville is asking too much of a superstar who already is carrying a large share of the burden.

Jackson is completing a career-best 60.2 percent of his passes and is seventh in the nation in passing yards per game (331.7). In winning the Heisman last year, Jackson’s completion percentage was 56.2 and threw for 272.5 yards per game. But Jackson can’t overcome a defense that is surrendering a league-worst 41.5 points per game in ACC play.

Who’s to blame? Ultimately, Bobby Petrino. When you’re a college coach, you’re the CEO. This isn’t the NFL. There is no upper management undermining you. No draft or free agency to limit your talent acquisition.

If Petrino doesn’t turn this around, it will go down as his greatest failure. Yes, even worse than his 2007 stint with the Atlanta Falcons when he resigned with three games left and a 3-10 record. At least then, he could say that he never got to coach Michael Vick, who wound up in jail for the dog-fighting scandal.

In college, with the exception of his first year at Arkansas when the Razorbacks went 5-7, Petrino has won at least eight games every season. This year, it’s going to be a challenge just to get to the six victories necessary to become bowl eligible.

Petrino is feeling heat for the first time ever at Louisville. He established himself as a coaching superstar in his first stop with the Cardinals when he went 41-9 from 2003-2006. His second act hasn’t been as successful, 30-16 since returning to the school in 2014. In fairness, Louisville’s conference competition is tougher now that it’s in the ACC versus Conference USA and the Big East.

Still, Petrino is compensated handsomely – $4.3 million per year – to find solutions and make Louisville a Top 25 program. He got plenty of credit for developing Jackson into the school’s only Heisman Trophy award winner. He should get blame for not surrounding Jackson with enough talent and support now.

The Boston College loss was a prime example of what ails Louisville. Jackson helped the team to a 21-7 second quarter lead and rallied his team from a 42-28 deficit to tie the score at 42. This was his second career game with 300 passing yards and 150 rushing yards. No other FBS quarterback has done this twice in the past 20 years.

And yet, Louisville fans were left exasperated as Boston College recovered a fumble that led to the Eagles’ game-winning field goal as time expired.

The loss might have ended Jackson’s chances to be a repeat Heisman Trophy winner. Now he faces the difficult task of dragging this team into competitiveness. He can’t do it alone. He needs help from his coach.

Petrino might not be able to fix a bad defense but he has to figure out a way to minimize its exposure. Asking Jackson to simply outscore the opposition week after week is an unsustainable game plan. Louisville’s remaining schedule, while challenging, is not Mission Impossible.

“We’re working hard at it,” Petrino said. “Obviously, we’re not seeing the results we want. We do have a belief in how we prepare.”

Petrino is running out of time and Jackson deserves better.