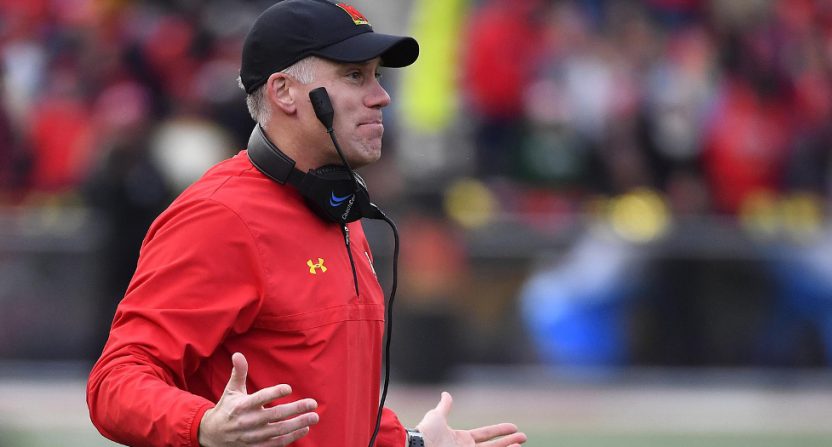 The University of Maryland’s investigation into their football program following the death of 19-year-old offensive lineman Jordan McNair after an offseason workout has finally concluded, and they’ve decided to bring back head coach DJ Durkin (who was on paid administrative leave pending the results of the investigation). That’s produced a remarkable amount of backlash, including from McNair’s parents and from current players, but it’s also significant how much outspoken criticism of this move came from members of the college football media. Here’s a sampling of that, starting with USA Today columnist Dan Wolken’s “Even if you believe DJ Durkin, it makes no sense for Maryland to keep him” piece:

You would imagine, based on the way Maryland subverted logic and torpedoed its integrity Tuesday, that it was acting in the service of a coach who actually was good at winning football games.

That’s a play we’ve all seen before in college football, and even in cases where schools completely abandoned their capacity for shame, at least they got some enjoyment out of it on 12 Saturdays a year.

But what is the Maryland Board of Regents getting for bringing back DJ Durkin and athletics director Damon Evans? What about that utterly replaceable combination is going to make it worth the abdication of moral responsibility that now taints the University of Maryland forever?

The answer is nothing, other than the squishy spine of Maryland’s plutocrat class deciding Tuesday that it can somehow rescue a problematic football program without removing those who were in charge of it.

That’s some strong language, all right. But Wolken is far from alone there. CBS’ Dennis Dodd chimed in with a column titled “Players must take a stand as Maryland further poisons its program by reinstating DJ Durkin”:

The Maryland players must protest. Probably a boycott is best. Don’t play, guys. Your lives are at stake.

Some sort of extreme dissent is all they have left. Their university abandoned them. Their strength coach humiliated them. Their head coach created a culture of intimidation. Oh yeah, and one of their brothers collapsed and eventually died running gassers while all of them watched.

Jordan McNair paid for this culture with his life.

Meanwhile, that coach, DJ Durkin, will continue to be paid and return to leading the team.

Too often, college football forces us to distinguish between two different sets of values. There are real-life, moral convictions, and then there is an altogether different scale of football justice. We see the distinction every season, when a favored player runs afoul of the law or a winning coach looks the other way when a problem arises in his program, then no one is punished adequately, even if everyone involved comes away with a sour taste in their mouths.

It’s rare when a decision goes against both value systems. On Tuesday, Maryland achieved that ignominious distinction.

Five months and one day after Jordan McNair collapsed at a Maryland football practice, D.J. Durkin, the head coach who oversaw the system whose failure led to the offensive lineman’s death, was reinstated to his job.

Barry Svrluga of The Washington Post went in hard on this as well in a column titled “Maryland ought to be ashamed”:

The following two statements cannot coexist, but they perfectly outline the chaos at the University of Maryland, which ought to be ashamed of itself: the father of Jordan McNair, who died under the oversight of the so-called leaders who were embarrassingly reinstated Tuesday, said on national television in August that DJ Durkin “shouldn’t be able to work with anybody else’s kid.” And James T. Brady, the chairman of the University System of Maryland’s Board of Regents, said Tuesday: “We will forever — forever — be guided by the memory of Jordan McNair.”

They’re hiding behind their tributes to the dead offensive lineman now, making hollow promises to create a better path forward by “honoring” his legacy. It’s disgusting. Real guidance wouldn’t parse whether the culture of the Terrapin football program was “toxic” or not. (News flash: To any reasonable person who read the regents-ordered report, it was, whether that report labeled it as such or not.) No, real guidance would have been deeming this entire operation unacceptable months ago, acting with urgency and compassion for those who were wronged, and cleansing itself of the people who created an appalling environment in the first place.

But this is the University of Maryland, and what we have learned about the University of Maryland is that logic doesn’t apply. There, being guided by the memory of a 19-year-old whose death was wholly and completely preventable means that the football coach who oversaw a program built on — among other things — demeaning players should be welcomed back. So here comes the inconceivable: DJ Durkin, back on the sidelines, maybe even at Wednesday’s practice, maybe even Saturday at Michigan State.

And Lindsay Gibbs also raked the decision over the coals in a Think Progress piece titled “Maryland’s decision to reinstate head football coach DJ Durkin is indefensible,” particularly blasting the Maryland board for threatening to fire university president Wallace Loh (who has now said he’ll retire) if he went through with his plan to move on from Durkin:

It is an indefensible decision, but one the board adamantly insisted upon. The board only has the authority to hire or fire the presidents of the state’s public universities — in this case, Loh. According to the Washington Post, Loh wanted to fire Durkin. But the board told him that he would be fired if he acted on that desire. (Loh, instead, said he will retire at the end of the year.)

“The board has no authority to hire and fire a football coach, but they made clear that returning DJ to the field was their highest priority,” a source told the Post.

Let’s just take a moment to digest that quote. A 19-year-old player died due to the neglect and inefficiency of the Maryland football program, and the highest priorityof the board of regents is to get Durkin back on the sidelines.

And there were plenty of other media members blasting Durkin on Twitter:

“I remember [DJ Durkin] sitting at our kitchen table assuring me that he would take care of my son…My child died there. That's something we'll never get back. That's a wound that will never heal” — Marty McNair, father of Jordan.

From one Md state lawmaker: "No parent and no taxpayer will be able to understand why the president is more responsible than the football coach. It doesn’t make sense.” I think we'll be hearing that sentiment a lot more https://t.co/1ofD2zh0wK

I’m cynical enough to never expect anybody to do the “right thing” when “the wrong thing” can be beneficial to them, so the most confusing thing to me in this whole debacle is trying to figure out what DJ Durkin’s done at Maryland to make keeping him worth it to anybody there.

You would think DJ Durkin is Vince Lombardi the lengths Maryland has gone to in justifying bringing him back.

I literally cannot believe what Maryland BOR chair is saying about DJ Durkin. ""We believe he is a good man and a good coach who is devoted to the well being of the student athletes under his charge."

It’s rare to see this much specific outcry over a move to keep a coach, and that helps to illustrate just how remarkable the Durkin situation is. McNair is far from the only college athlete to die following a workout (a piece by HBO’s Real Sports last month explored how 30 college football players since 2000 had died following non-contact workouts), but the failures in the approach to that workout, the medical treatment for McNair after he collapsed (including not putting him in an ice bath thanks to concerns about his size) and the overall culture of the Maryland program under Durkin (which included subjecting players to videos of serial killers, drills entering eyeballs, and animals eating other animals) stand out from the pack.

Moreover, as many noted, it’s not like Durkin has proven to be an exceptional coach; he’s 10-15 through two seasons at Maryland (he was suspended before this third seasons started), and just 5-13 in conference. Choosing to keep him over your school president’s wishes, despite criticism from McNair’s parents and team members, and despite widespread media criticism is certainly a choice. We’ll see how well that goes for the Terrapins, but it’s definitely notable how much outcry this has provoked.