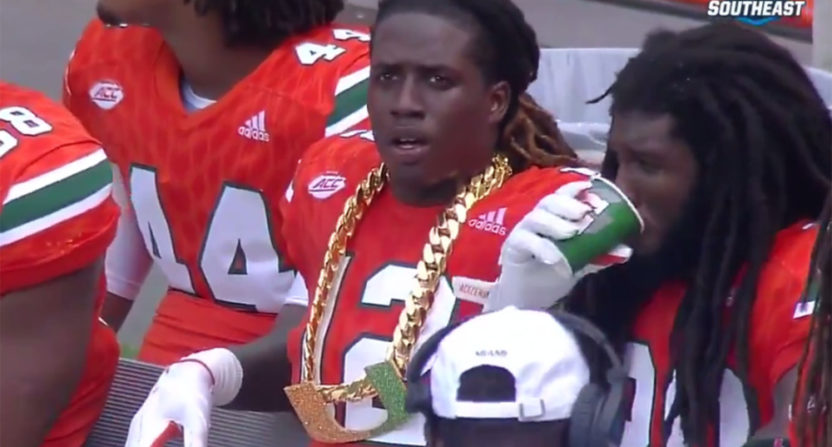 College football teams are resorting to any number of gimmicks to reward players for causing a turnover this season, but none are as fitting and suitable for their program as Miami’s gigantic gold chain. With Miami undefeated, the question of whether or not Miami is officially back can begin to kick up dust if the Hurricanes win this weekend at home against Virginia Tech, but there is no mistaking this program has seen the swag make a comeback in a big and flashy way with the massive piece of jewelry.

The chain is a work of art with large gold links, making it look almost as if a player has a gold snake draped around his neck. Hanging from the bottom is the Miami logo, made of orange and green sapphires. This is, without question, the most Miami thing you could come up with for the Hurricanes when it comes to the growing trend of sideline gimmicks. Players go nuts when they come up with a play to be rewarded with the chain on the sideline. This piece of jewelry even got its own profile piece on ESPN as the Hurricanes prepare for a pivotal ACC Coastal Division game against the Hokies this weekend.

In it, we learn the chain is the work of art created by AJ Machado, nicknamed the King of Bling for his previous work done for a number of NFL players. Now, Machado’s latest work of art is taking the nation by storm. Kids even created their own chains for Halloween costumes as Miami’s success continues to keep the Hurricanes nationally prominent.

“I knew it was going to be big because no one has done the chain, but this has been crazy,” Machado said.

While Machado put his skills to work to create the chain we see on the sidelines today, the idea came from Miami defensive coordinator Manny Diaz, who had cornerbacks coach Mike Rumph put the plan in motion. From ESPN:

Former Miami defensive tackle Vince Wilfork happened to be in the jewelry shop at the time Rumph called. They all agreed they needed a thick, 10-karat-gold Cuban link chain because its screams “Miami.” Then they decided on a massive “U” charm filled with orange and green sapphire stones, to elevate the swag to the highest possible level.

Machado got to work, special ordering all the stones, then setting each one by hand. The price tag remains a secret. When he delivered it to the Miami coaches 10 days later, they were floored.

The chain was an instant hit for Miami’s players, and it continues to be a motivating factor on the Miami sidelines this season. Miami is sixth in the nation in turnover margin with a +10 mark on the season. The Hurricanes have forced 16 turnovers this season, which is three fewer than Miami’s entire forced turnover count from a season ago in Mark Richt’s first season with the program. Is it the chain? The experience? A favorable schedule? Maybe it’s a combination of all those factors.

Whatever the case, Miami players will be looking to be the next getting that chain placed around their neck every time they step on the field.