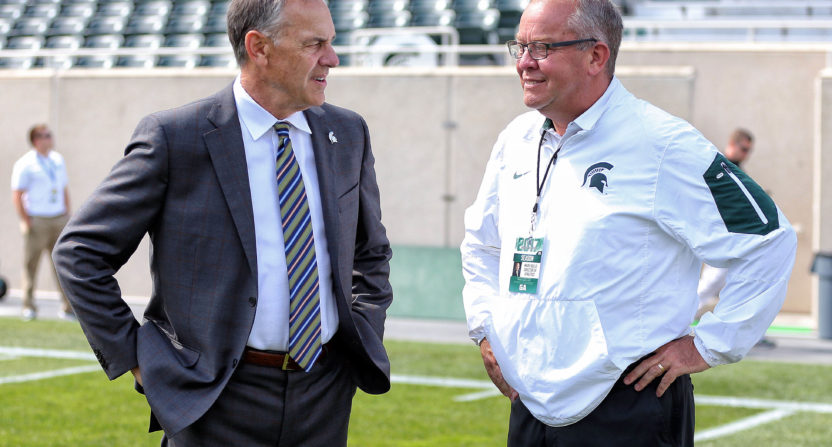 The Dr. Larry Nassar scandal has gripped the nation and led to multiple resignations at multiple entities. Over the last week, three USA Gymnastics board members and Michigan State’s president have resigned. On Friday, MSU’s Athletic Director Mark Hollis has added his name to the list of resignations as well, according to ESPN.

“It’s been an absolute honor to guide the Athletic Department for the last decade. That being said, today I am announcing my retirement,” former AD Mark Hollis said in a statement released by the university.

“This was not an easy decision for my family, and you should not jump to any conclusions based on our decision — listen to facts,” Hollis added.

Hollis had been the AD since 2008, and over his 10-year tenure as the school’s athletic director, he oversaw the program that permitted, whether they knew it or not, Nassar to sexually assault his patients for nearly two decades until his 2016 arrest.

To date, no reports have emerged stating that Hollis knew about the abuse before Nassar was arrested in 2016. However, since the allegations have emerged, at least six women have said they told athletic trainers, coaches, or a staff psychologist about Nassar’s actions.

But Hollis’ resignation might not only have to do with the Nassar case. Shortly after resigning on Friday, ESPN released a lengthy report on how Michigan State’s sexual abuse scandal goes beyond Nassar and gymnastics. In fact, it also goes deep into the highly-rated Spartans’ basketball and football programs.

Over the past three years, MSU has three times fought in court — unsuccessfully — to withhold names of athletes in campus police records. The school has also deleted so much information from some incident reports that they were nearly unreadable… And attorneys who have represented accusers and the accused agree on this: University officials have not always been transparent, and often put the school’s reputation above the need to give fair treatment to those reporting sexual violence and to the alleged perpetrators.

Even MSU’s most-recognizable figures, football coach Mark Dantonio and basketball coach Tom Izzo, have had incidents involving their programs, Outside the Lines has found.

Dantonio and Izzo have had lenghty careers in Lansing. Dantonio has been Michigan State’s head football coach since 2007, and since taking over the program, the Spartans are 100-45 and have been to 11 bowls and while capturing three Big Ten championships. Izzo has led the Spartans’ college basketball program since 1995, making appearances in seven Final Fours and winning National Championship in 2000.

However, their success on the field and court will now forever be overshadowed by what ESPN calls a “pattern of denial, inaction, information suppression at Michigan State.”

In regards to the football program:

Since Dantonio’s tenure began in 2007, at least 16 MSU football players have been accused of sexual assault or violence against women, according to interviews and public records obtained by Outside the Lines. Even more, Dantonio was said to be involved in handling the discipline in at least one of the cases several years ago. As recently as June, Dantonio faced a crowd of reporters who were asking questions about four of his football players who had been accused of sexual assault. Six questions in, a reporter asked Dantonio how he had handled such allegations previously.

“This is new ground for us,” Dantonio answered. “We’ve been here 11 years — it has not happened previously.”

As for the basketball team:

Outside the Lines also has obtained never-before-publicized reports of sexual or violent incidents involving members of Izzo’s storied basketball program, including one report made against a former undergraduate student-assistant coach who was allowed to continue coaching after he had been criminally charged for punching a female MSU student in the face at a bar in 2010. A few months later, after the Spartans qualified for the 2010 Final Four, the same assistant coach was accused of sexually assaulting a different female student.

This pattern of sexual assault on campus in Lansing goes beyond basketball and football and includes Nassar. Before this week, it hadn’t been reported that Hollis knew of investigations into Nassar’s alleged abuse. The OTL report on Friday makes that no longer true.

Outside the Lines has also reported that back in 2014, Michigan State didn’t tell federal officials that it was conducting two Title IX investigations of Nassar, despite federal officials being on campus that same year looking into MSU’s sexual assault allegations. It’s hard to believe that Hollis would not have known about those 2014 investigations.

Even more damning is the following:

The Outside the Lines report also found that MSU administrators still have not provided to federal officials all documents related to the Nassar allegations.

One person who spoke with Outside the Lines about this still-developing scandal is former Michigan State sexual assault counselor Lauren Allswede. In 2015, Allswede left the school due to frustrations she had with how the school’s administrators handled sexual assault cases.

“Whatever protocol or policy was in place, whatever frontline staff might normally be involved in response or investigation, it all got kind of swept away and it was handled more by administration [and] athletic department officials,” says Allswede, who worked at MSU for seven years. “It was all happening behind closed doors. … None of it was transparent or included people who would normally be involved in certain decisions.”

Circling back to Hollis, the AD’s resignation reportedly comes two days after Outside the Lines asked Michigan State if they could interview Hollis, Izzo, Dantonio, and other school officials about their findings. On Thursday, Jason Cody, the school’s spokesman who OTL spoke with, issued the following statement:

“Over the past several years, we have dedicated significant new resources to strengthening our efforts to combat sexual violence. Every day, people across campus are working diligently on this critical issue. We acknowledge, however, that we have sometimes fallen short of our goal and the expectations of others. It is clear more needs to be done, and we are using every resource available to get better.”

MSU has indeed fallen short of their goal and it has led to the resignations of Hollis and Lou Anna Simon, the school’s president. It remains to be seen how much deeper this OTL story will go, and if it will eventually lead to more resignations and punishments from the NCAA.

This past Tuesday, the NCAA opened up an investigation into the school’s handling of the Nassar abuse allegations. One can assume that investigation will expand in the wake of this newest report.