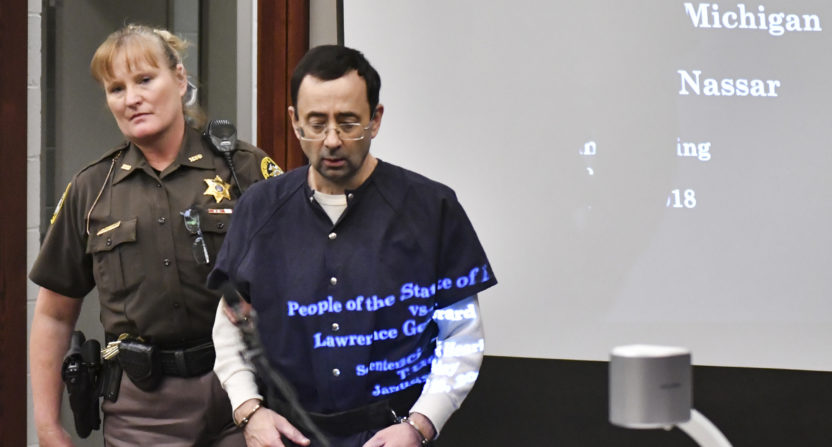 The NCAA has formally begun an investigation of Michigan State over the Larry Nassar case, according to the New York Times. Michigan State received a letter of inquiry regarding any potential rules violations in how the school handled Nassar’s case as he sexually assaulted dozens of student-athletes.

From the Times’ developing story:

N.C.A.A. bylaws require colleges to protect the health, safety and well-being of athletes. Among those who have said Dr. Nassar abused them are members of the Michigan State cross country and softball teams. Kathie Klages, the former gymnastics coach who retired last year, has been accused of seeking to cover up allegations against Dr. Nassar.

By calling them out, trustee Joel Ferguson shamed NCAA into it. Extra legal bills for MSU. https://t.co/3qZMGOu5fq

I bet the NCAA really appreciated MSU trustee Joel Feguson's comments laughing at the prospect of the school being investigated over a women's sport.

A Title IX investigation in 2014 cleared Nassar of any wrongdoing after he was accused of inappropriately touching an athlete, but he was allowed to continue practicing for 16 months while he was under investigation.

In the last two weeks, Simone Biles joined a long list of gymnasts who accused Nassar of sexual abuse; multiple victims, including Aly Raisman, delivered piercing statements to him at his sentencing; and the judge presiding over the sentencing was dismayed by Nassar’s claim that facing victims at his own sentencing was too stressful for him. In the fallout, three USA Gymnastics board members have resigned.