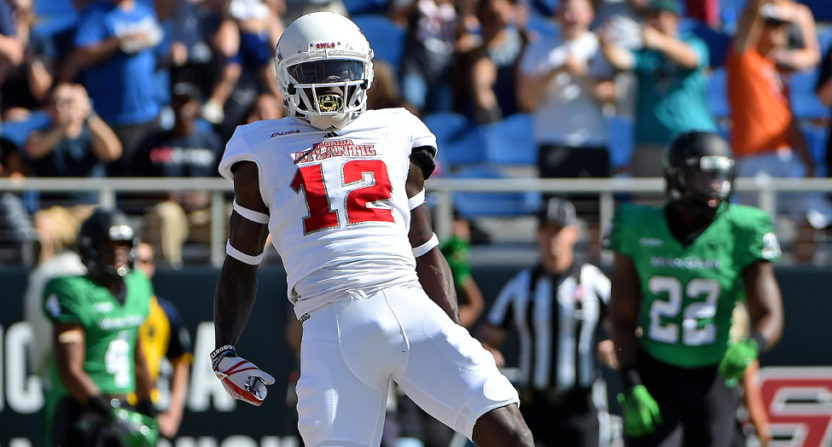 The Netflix documentary series Last Chance U has earned plenty of plaudits for its portrayals of what it’s really like for junior college players, focusing on those at East Mississippi Community College in its first two seasons. (It shifted to Independence Community College in Kansas for the forthcoming third season. And it also made recognizable faces out of many of those who were featured, from academic counselor Brittany Wagner to coach Buddy Stephens to countless players.

One of those players, John Franklin III, was featured in the first season of the show as a prominent transfer from Florida State, then went on to play at Auburn and Florida Atlantic. He’s played quarterback and receiver, and is now looking to make the NFL in that latter role. And he spoke to SB Nation’s Alex Kirshner about that and had some interesting things to say about on-the-field football and his own skillset, but what really stood out was his comments on the show and what it meant for him to be featured there:

More people have watched you off the field than probably any other player in this draft. How has that exposure changed your life and your football career?

But also, I like it a lot, because it gave me a platform to be able to reach out and help others through my story and through my journey. I get a lot of positive response back from a lot of people around the world — Germany, France, Paris, a lot of places that use my story and it keeps them going, and they always let me know how me personally and my story from the show is what kept them from stopping what they were doing.

It wasn’t all easy for Franklin, of course. He was mostly featured as the backup quarterback in the first season, and his disappointment at not playing was clear. In fact, he told Kirshner the director (presumably Greg Whiteley, the show’s creator and primary director) warned him in advance he might not come off in a positive light:

“Before it came out, the director warned me. He was like, “Yo, at the end of the day, it’s entertainment, what people wanna see.” At first, I was like, “Man, is this gonna cause me problems?” but then I started thinking about it like, “Man, it’s real life. It’s like stuff you can’t make up.”

While Franklin went on to say he’s happy with it in the end “because people can relate to it and see that, and maybe they’ll just keep going a little bit more,” he also mentions it took time for him to be okay with it. The show’s prominence has helped him now reach others with his story, but it’s also led to some negative moments (like him dropping the ball before the end zone in the Conference USA championship game last year) receiving more prominence than they might have otherwise. That play came in a blowout 41-17 win for FAU and didn’t affect the outcome, and it might have been noted anyway thanks to its silliness, but it got maybe a little more attention thanks to the Last Chance U connection.

And that’s a double-edged sword Franklin’s going to have to deal with as he now tries to go on to the NFL. On one hand, his Last Chance U participation was probably good for his chances, as it helped get him on the radar for a lot of people and helped show off his impressive skills. But on the other hand, coaches and executives have seen a whole lot more of him outside of game tape than they have of many other prospects, and the notoriously-nitpicky NFL evaluators sometimes takes issue with personality-driven moments. (See the whole Josh Rosen thing.)

We’ll see how it works out for him, but it’s certainly interesting to watch a player whose appearance on a documentary led to a whole lot of prominence go through the draft process. And that also means there will be a lot of people watching where Franklin winds up going.