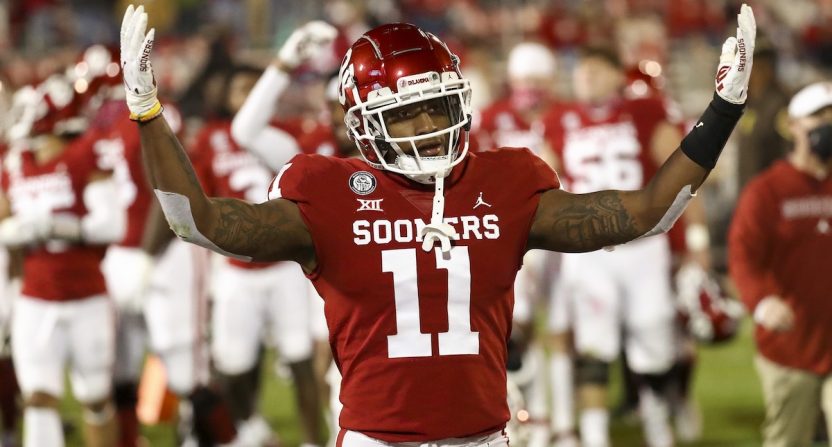 Oklahoma and West Virginia have had their 2020 Big XII matchup affected again by COVID-19. And this time, the game is going to be canceled, not postponed.

The Big XII conference announced on Thursday that the Sooners and Mountaineers won’t play on Saturday (a game that was rescheduled from Nov. 28). The previously scheduled game was postponed due to a COVID-19 outbreak within the Oklahoma program. But now, it’s West Virginia pausing all football activities for seven days due to a surge in positive results and contact tracing.

Numbers among players and staff were not released. But according to Sooners Wire, the Mountaineers had approximately 50 players available for Saturday with others deciding to opt out for the rest of the season. Big XII rules state that a team must have 53 players to play, including seven offensive linemen, four interior defensive linemen, and one quarterback. The Mountaineers were already short-handed last week in a 42-6 loss at Iowa State.

The Oklahoma-West Virginia game was scheduled for noon ET Saturday on ABC.

The West Virginia football program is pausing all team-related activities until December 17th, including the cancellation of Saturday’s game against Oklahoma. https://t.co/fcbsZ0JDSr

Included in the official announcement of the game’s cancellation, the Big XII also said that Oklahoma will play in the conference championship game on Dec. 19, matched up against Iowa State. The Cyclones lead the Big XII with an 8-1 record, while the Sooners are behind them at 6-2. Oklahoma has played one fewer game but has no opportunity to make that up.

Iowa State is ranked No. 7 in the Week 15 College Football Playoff rankings, while Oklahoma holds the No. 11 spot. As of now, the Sooners are a 4.5-point favorite.

Rather than attempt to schedule a different opponent for Saturday, the Sooners are expected to take a bye week before the Big XII title game. Iowa State already had a bye scheduled.

West Virginia ends its season at 5-4 (4-4 in Big XII play). The Mountaineers are expected to receive an invitation to a bowl game.