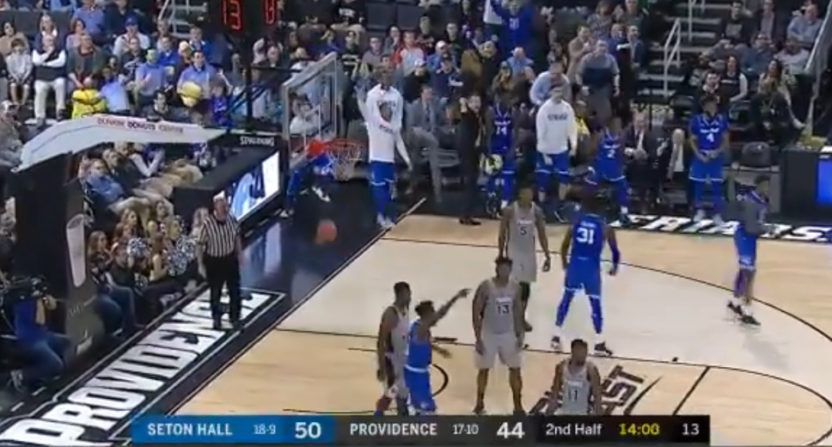 Having a multi-use arena that can be either a sheet of ice or a hardwood court sounds like a great idea in theory, but it can cause some problems from time to time. The latest case in point comes in Wednesday night’s Seton Hall Pirates-Providence Friars Big East men’s basketball clash, which was suspended after the ice under the court at Providence’s Dunkin’ Donuts Center began to melt. Here’s more from Robert O’Neill of SB Nation’s Big East Bias:

It was unseasonably warm in Providence on Wednesday. As a result, the ice under the court at the Dunkin’ Donuts Center was melting onto the court. Seton Hall’s Desi Rodriguez left with a knee injury in the first half, and did not return. Players from both teams slipped multiple times throughout the second half leading to the eventual postponement.

This happened after discussions between the coaches:

Kevin Willard, Ed Cooley and officials discussing the court, which is over ice and seems to be slippery. Seton Hall AD Pat Lyons in the background chiming in as well. A few guys have fallen since Desi Rodriguez went down.

The game was postponed with Seton Hall leading 56-47 with 13 minutes left. The Seton Hall team announced on Twitter that the game will be resumed at Providence’s campus Thursday at noon Eastern:

The game will be continued tomorrow at noon at Alumni Hall on Providence's campus. #HALLin

Here’s a clip from the broadcast shortly before the suspension of play:

This isn’t the first time a basketball game’s been delayed or postponed thanks to weather effects. Last March, a Portland TrailBlazers-Minnesota Timberwolves game was postponed thanks to ice melting under the floor at the Timberwolves’ Target Center and creating slippery conditions. (There isn’t a NHL team that regularly plays at the Target Center, as the Minnesota Wild play over at the Xcel Energy Center, but there was a Disney on Ice event at the Target Center the night before.) And earlier this year, it wasn’t quite the same thing, but a New Orleans Pelicans’ game against the Indiana Pacers was delayed and then postponed thanks to rain and a roof leak.

Still, this one may be particularly notable given how both Providence (8-6 in conference, 17-10 overall) and Seton Hall (7-7 in conference, 18-9 overall) could potentially contend for a NCAA tournament berth, and considering how both schools have short turnaround before big games Saturday (against Georgetown and St. John’s respectively). That caused some to speculate that Seton Hall coach Willard might be especially upset, considering how his team had a significant lead when the game was postponed:

So Seton Hall-Providence resumes at noon at PC's campus gym tomorrow, and the Pirates will have one day's turnaround for a trip to St. John's. Willard should be apoplectic about this.

With Seton Hall having to finish Providence game tomorrow at noon, will have less time for Saturday against St Johns. Could be a factor #sjubb #shbb

At any rate, this is certainly unusual, especially considering that it could potentially have an effect on the NCAA tournament. We’ll see what happens when the game is made up Thursday.