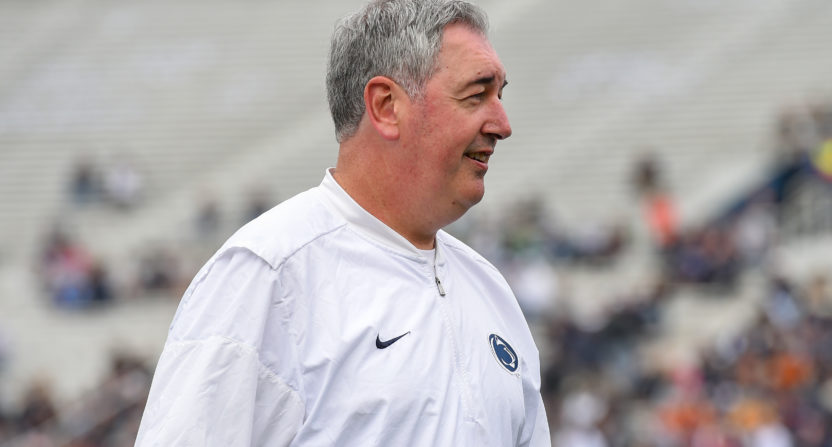 Just days after wishing farewell to Dan Mullen as he accepted a job offer from Florida, Mississippi State came to an agreement to hire Penn State offensive coordinator Joe Moorhead to be their next head coach, according to multiple reports. Brett McMurphy was among the first to report the news of the Mississippi State hire.

The hiring of Moorhead is a great hire for the Bulldogs. Moorhead is an offensive-minded coach who should manage to be able to continue building off the foundation Mullen left behind. The addition of Moorhead as Penn State’s offensive coordinator was a tremendous one that instantly paid off in the 2016 season. Penn State’s offense, though still recovering from NCAA sanctions, was given a breath of fresh air with innovative and competent offensive strategies that put players in the best possible position to make plays and utilize their strengths to their advantage. If he can keep Mississippi State humming the way Mullen managed over the years, Moorhead and Mississippi State may look forward to a good relationship for years to come.

It is important to take note of just how long Mississippi State’s vacancy was on the market. It lasted just two days. Credit Mississippi State for being able to move so swiftly (even if a formal announcement is said to be scheduled for Thursday while the finer details get ironed out), but it is also fair to suggest Moorhead has been one of the top coordinators that was worth including on the short lists every athletics director should have ready to use the instant it is needed.

The Mississippi State job did not take long to fill. Meanwhile, Tennessee’s coaching search continues to strike out.

After an initial attempt to hire Ohio State defensive coordinator Greg Schiano to replace the fired Butch Jones was thwarted by an angry internet mob, Tennessee has been busy scrambling to find the next head coach, and the search has not been going so well.

Duke head coach David Cutcliffe reportedly informed Tennessee he was not interested and wanted to end his coaching career at Duke. Imagine telling someone 20 years ago the head coach at Duke would one day say “no thanks” to Tennessee. But for Cutcliffe, it makes sense. He has built something good and comfortable at Duke, and the pressures of the job Tennessee would bring may not be something Cutcliffe would want to deal with as he brings his coaching career to a close.

Tennessee has reached out to David Cutcliffe about the Vols' head coaching job, but Cutcliffe informed UT officials that he wasn't interested and plans to finish his coaching career at Duke. The Blue Devils are bowl eligible for the 5th time in the last 6 years.

The attention shifted to Oklahoma State head coach Mike Gundy with an all-out blitz that had people tracking flights, and even included a phone call from Peyton Manning. Gundy appeared to be the new top target, and would have been a tremendous upgrade over Schiano. But Gundy doesn’t appear to be going anywhere either.

Sources: Mike Gundy has decided to remain at Oklahoma State. He met w/Tennessee officials Tuesday in Dallas. Gundy reportedly had a 6-year, $42 million deal from Tennessee, but will remain at his alma mater https://t.co/m1igbKIEpx

Maybe the Gundy interview was a ruse anyway that could benefit both sides. For Gundy, he can sell his commitment to Oklahoma State despite overtures from an SEC program, and maybe get a raise out of it in Stillwater. For Tennessee, it shows they went out to try and get the best possible coach they could. While on the road, rumors about Tennessee potentially interviewing SMU head coach Chad Morris came to the surface as well, but Bruce Feldman was one national reporter who put that one to rest, at least for the moment.

Contrary to reports, #SMU coach Chad Morris is not expected to interview tomorrow with #Tennessee, source tells me.

Morris could also be a target for Texas A&M. If Tennessee does have Morris at the top of their list at this point, it might be a mighty struggle to win Morris over if Texas A&M comes calling about their vacancy.

It’s been a frustrating time to be a Tennessee fan, but the search is still on and there are still opportunities to make a good hire. With Florida and Mississippi State seemingly making good coaching hires, Ole Miss keeping their coach, Texas A&M likely not to be waiting around too much longer before filling their vacancy, and after seeing Chip Kelly go to UCLA, it has to be frustrating for Tennessee fans to see their program either making a bad coaching hire decision or striking out with some candidates. But if all of this leads to a solid coach that will leave fans feeling optimistic about the future, all will be forgiven in Knoxville. At least for another three years.

Reminder: Every search is only as good or bad as its end result.

People will never forget this search, but they will forgive it if Tennessee somehow finds a way to make it right.