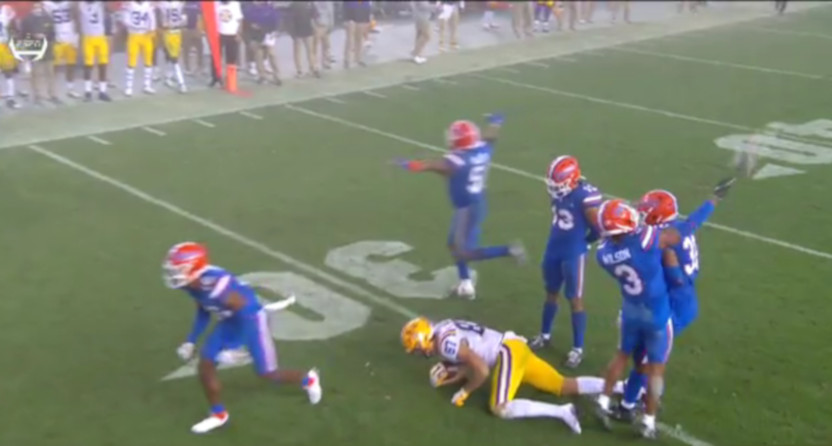 The Florida Gators, No. 6 in both the CFP rankings and the AP poll this week, fell 37-34 at home to the LSU Tigers (who were playing with just 69 scholarship players thanks to opt-outs) Saturday. And they did so for want of leaving another player’s shoe alone. Inside the final two minutes, with the game tied at 34, Florida got a big stop on third and 10, shutting down tight end Kole Taylor after just a four-yard gain on a pass from QB Max Johnson. But Gators’ defensive back Marco Wilson then threw Taylor’s shoe down the field, leading to an unsportsmanlike penalty, a first down, and the continuation of the drive.

That drive would end with a Cade York field goal from 57 yards out and less than 30 seconds left, and that would prove to be the game-winning play. But the game-losing play was arguably the shoe toss. Here’s how it looked on ESPN’s broadcast in real time:

That clip also includes the replay, which has ESPN announcers Sean McDonough and Todd Blackledge discussing the call, and McDonough saying “I don’t think I’ve ever heard an official announce ‘Throwing a player’s shoe.'”

That’s an insane play for this game to turn on. But it did turn there; that gave LSU the ball at their own 44, and Johnson ran for nine yards, then RB Chris Curry ran for seven. Curry was then stopped for a loss of two, and Koy Moore was stopped for a loss of one after a pass, pushing Tracy into a difficult 57-yard (career-long) field goal attempt in the fog. But York nailed it, and the official LSU football account even referenced the shoe with that video:

THE KICKER WITH THE WINNING SHOE pic.twitter.com/riJPrN3Qco

Florida got the ball back with 23 seconds left, and they managed to drive to the LSU 33 and set up a 51-yard field goal attempt to tie the game, but Evan McPherson missed that. But really, the standout moment was the thrown shoe. (And that’s saying something, considering that this game also had maybe the craziest interception of the year.)

And while Florida (now 8-2) was slightly on the outside of the College Football Playoff looking in heading into this game and unlikely to change that with a win, they still had a big opportunity ahead of them with next week’s SEC Championship Game against No. 1 Alabama. If they somehow manage to pull off the win there, they might get some playoff discussion still (depending on what else happens). But any case they might have will now be a lot weaker thanks to this loss, and thanks to a thrown shoe.