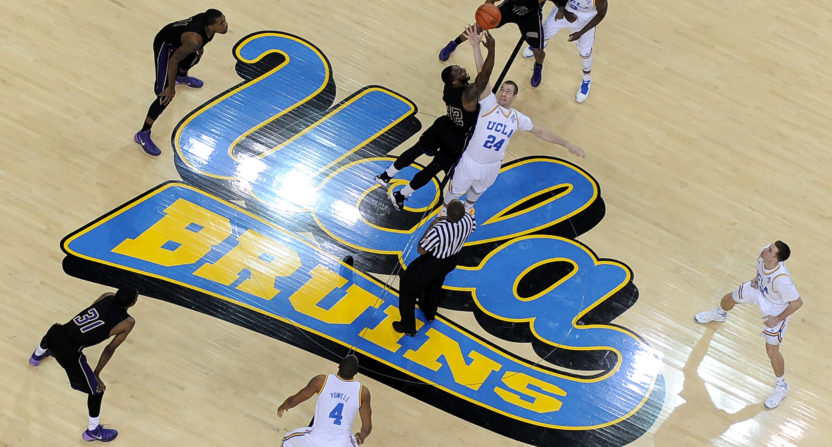 Three incoming UCLA freshman basketball players have spent the past few days under detention in their Shanghai hotel, having been arrested for shoplifting. Included among them: LaVar Ball’s middle son LiAngelo.

According to a Wall Street Journal report, the three are heading back to the United States, in the wake of some slight intervention from President Trump:

Three UCLA basketball players detained for a week in China flew back home late Tuesday, hours after U.S. President Donald Trump said he had requested assistance on their behalf from his counterpart Xi Jinping.
UCLA freshmen LiAngelo Ball, Jalen Hill and Cody Riley were seen late Tuesday at Shanghai’s Pudong International Airport checking into a Delta flight bound for Los Angeles, airline staff said. The flight took off after 9 p.m. Their departure came after a week of tension, with the players detained by police in the eastern city of Hangzhou as suspects in an investigation of suspected shoplifting from a Louis Vuitton boutique.
Ending his trip to Asia on Tuesday, Mr. Trump told reporters aboard Air Force One that in recent days he asked the Chinese president for help. Mr. Trump called the incident “unfortunate” but said he had had “a great conversation” about the players with China’s leader. “President Xi has been terrific on that subject,” he said.

This is the best outcome for everyone involved, seeing as how in China, even crimes like shoplifting can carry penalties of up to 10 years in prison.
In a moment of clarity, President Trump even said this:

In his comments, Mr. Trump issued what appeared to be a veiled admonishment to the players. “You know, you’re talking about very long prison sentences. They do not play games,” he said, apparently referring to Chinese judicial officials.

And he’s right! The Chinese don’t play games. That’s why it doesn’t make a whole lot of sense for college teams to be spending preseason tours there, because while this ended up with everyone returning home after a brief inconvenience, it probably didn’t feel that way to the players or the families of the players, and it’s easy to imagine a scenario in which it didn’t end with everyone coming back after a slap on the wrist.
So, why would schools like UCLA and Georgia Tech end up in countries like China for a preseason game? One guess:

In China, UCLA was the guest of Alibaba Group Holding Ltd. as part of a massive marketing campaign, which included a U.S. college basketball game on Saturday that was to be the three players’ freshman debut.

There it is!
Before some of you wring your hands too hard to send an angry tweet, of course the players shouldn’t have broken the law. Stealing is stealing, regardless of where you are in the world. It’s not even original; they go to school in Los Angeles, there are multiple Louis Vuitton stores within a half an hour of Pauley Pavilion. If you’re on vacation you should at least steal from a place you can’t steal from at home.
And if they did indeed swipe some sunglasses from a boutique in China (and it’s not always smart to take the Chinese government at their word that a crime was committed), they’re not that bright.
Which isn’t a surprise, because most college freshmen aren’t that bright! This shouldn’t be news to anyone. They should never have been put in that position in the first place, considering the very limited upside involved was all in favor of something called Alibaba Group Holding Ltd., as well as the athletic department budget for UCLA, a school with a 4.3 billion endowment and athletic department revenue near $100 million per year.
In the end, it’s good they’re coming home and not doing hard time in a Chinese prison, because that’s pretty much always the preferable outcome for just about anyone. Will it lead to a joing Trump/LaVar Ball press conference? Let’s hope not, but maybe. If it forces colleges to think twice about where they send their players for glorified exhibitions, though, it might be worth it.
[WSJ]

2 thoughts on “UCLA’s arrested players are reportedly coming home from China, but they shouldn’t have been there at all”