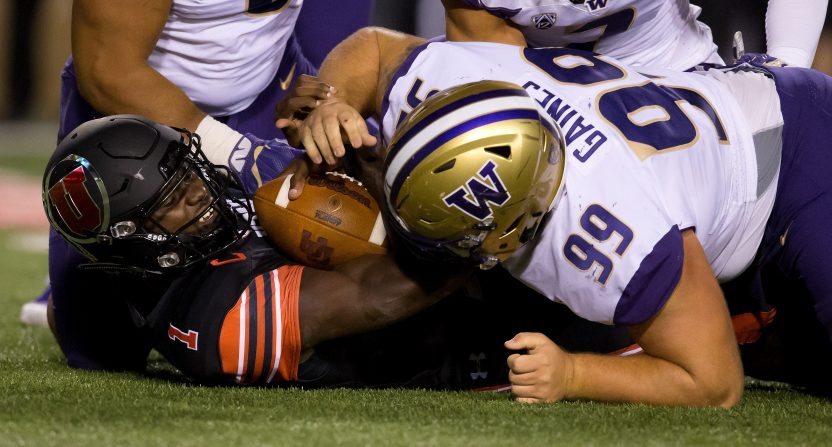 Somewhere along the way this season, Washington will lose a game in Pac-12 play. Saturday night’s road game at Utah showed the Huskies aren’t a team that will run away with the conference this season, and they’re prone to giving up opportunities to their opponents to get a crack at them. But as demonstrated by Utah, you’ll have to be creative with the offense if you’re going to take the Huskies down in Pac-12 play.

Washington’s defense has been the glue holding together things in the early going this season. Washington lost a defensive battle in Week 1 in Atlanta against Auburn, a game in which turnovers by Jake Browning prevented Washington from securing a massive win to open the year. Browning again had moments that puzzled as Washington cracked against Utah. One play, in particular, came in the fourth quarter, when Browning was moving around in the backfield before getting rid of the football with a freshman mistake, something you don’t like to see from a senior.

After Browning’s bizarre interception, Washington’s defense stood firm as Utah failed to cash in with any points. A fourth-down pass fell incomplete four plays after the turnover (which should’ve been a touchdown if not for a fumble out of bounds on the return). It was moments like that which showed teams like Utah can’t afford to not capitalize on Washington’s mistakes.

It may be redundant to say, but it’s true. When Washington gives you lemons, the opponents have to make lemonade. Instead, all Utah did was take the lemons and suck on them. That’s how sour this loss should be for Utah.

Utah had three turnovers in the game. The first occurred late in the second quarter, just before halftime. Tyler Huntley had a pass picked off on a 3rd-and-8 from the Washington 37-yard line at the Washington 11-yard line. Washington took a knee and took a 14-7 lead into halftime. The turnover may have cost Utah at least three points.

On Utah’s first offensive possession of the second half, after the Utes defense forced a three-and-out on the opening drive by the Huskies, Britain Covey fumbled the football after a 16-yard pick-up on a pass from Huntley. The ball was recovered at the Utah 44-yard line, and the Huskies turned the turnover into a touchdown eight plays later for a 21-7 lead. On Utah’s ensuing possession, Bronson Boyd fumbled the football after a gain of 15 yards on another Huntley pass.

Two straight possessions with would-be first downs resulting in fumbles recovered by Washington. Tack on the missed opportunity after the poor decision by Browning to throw the ball directly to defensive lineman Pita Tonga, who lost control of the football without being touched on his way to what should have been a defensive touchdown (and the Utes failing to score themselves), and it was that kind of night for Utah.

Washington is the best team in the Pac-12, but they’re far from invincible. But if nobody in the Pac-12 is going to capitalize on their mistakes, Washington will manage to wiggle their way back into the Playoff discussion.

The Huskies also picked a good day to get out of Salt Lake City with a win. The No. 10 Huskies won on a day that saw two top-10 teams (Wisconsin and Auburn) go down in the final moments, and another (Notre Dame) narrowly escape an upset bid at home.