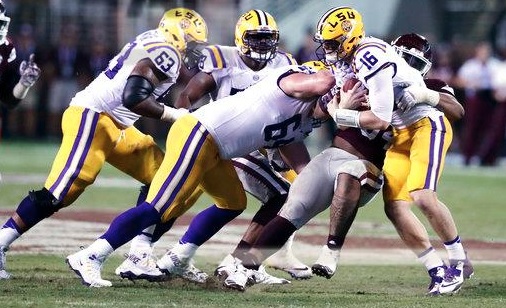 Week 3 in college football did not provide us with any major shocks, though Texas came close to shaking up the Playoff race, and we saw a pretty big upset in the last game of the night to go final. The lights may have gone out in San Diego, but they did not go out on the Aztecs’ season. In fact, after back-to-back losses, Stanford is inches away from being the first preseason contender to be eliminated from the Playoff.

Maybe it’s a little unfair to expect real chaos after just Week 3. There is a ton of football left to be played, and the upsets will come eventually. Clemson looks like the best team in the country again, but the Tigers are young and inexperienced, which means they have to worry about potential lapses. Alabama looks dominant, but the Tide’s defense showed some cracks against Colorado State. Oklahoma State’s offense is an absolute juggernaut, but an unproven defense could struggle against Big 12 competition.

As we go further down the line, each team has flaws. This past week, LSU was the team to have its flaws exposed in brutal fashion. More games like that will come, and as they do we will see separation start to form in the Playoff race. It’s not here yet, but it’s coming. With an expected weak lineup next week, I’m sure some games will sneak up on us to shake up the Playoff race.

Week 3 was a pretty slow one for eliminations. We have weeded out almost all of the lower-conference teams (there are only three teams left between the Sun Belt, MAC, Conference USA, and Mountain West conferences). The AAC has some teams hanging around, which shows that it has achieved some separation from the other four Group of 5 conferences. After that, though, we haven’t really seen eliminations in the Power 5. Part of that is due to a lower-than-usual number of P5 teams losing to Group of 5 teams, but a bigger part is the fact that they just aren’t picking up enough losses overall yet to be eliminated. As conference play kicks up in the coming weeks, though, we will see teams pick up losses and slowly eliminate themselves from the Playoff.

We should start seeing eliminations in the Power 5 in the coming weeks. One loss, especially a conference loss, will almost never eliminate a power conference team this early, but the second loss can be a killer. It’s still a little early to eliminate all two-loss P5 teams, but some of them just won’t have the chances for quality wins (or looked bad enough in their losses, like Kansas and Pitt) to get in as a two-loss team.

For example, Boston College is not yet eliminated because the Eagles will have chances to beat Clemson, Florida State, and Louisville this season. But even if the Eagles can upset Clemson this coming week (a highly unlikely event), losses throughout the season by Florida State or Louisville could be enough to eliminate Boston College, just due to the loss of quality wins. Elimination at this point is a bit more art than science, but understanding the process can help understand how the committee thinks.

With a convincing victory over Stanford, the Stan Diego State Aztecs firmly asserted themselves as the top Group of 5 team. It was just an upset win — the Aztecs lined up against Stanford and straight-up beat the Cardinal. It wasn’t a dominant win, but it also wasn’t an underdog playing amazing to upset a more talented team. Stanford was more talented, but not significantly enough that it was an uneven matchup. There were no gimmicks, no tricks (other than the blackout).

San Diego State has very quietly built up a top Group of 5 program, and the Aztecs showed that — and then some — late Saturday night. The Mountain West must be ruing Boise State’s collapse against Washington State last week. If the Broncos had completed that upset, we could be talking about the Mountain West only needing moderate chaos to be in the Playoff conversation.

As things stand, expecting a Mountain West Playoff bid is a pipe dream at best (if Stanford and San Diego State both win out we can talk about it, but that’s the only scenario). But the conference absolutely should think that it’s in the clubhouse for a New Year’s Six Bowl. It’s a long season, and San Diego State will have opportunities to stumble, but the team that played Stanford late Saturday night didn’t look like the stumbling type.

The American Athletic Conference still has a bunch of talented undefeated teams with good wins. Unfortunately, USF isn’t one of those. The Bulls’ schedule is weak, and we knew that before the season started. A win over Illinois will have no sway over the committee whatsoever, and USF misses both Navy and Memphis in cross-divisional play. The AAC champion will be in the running for that bid, but it’s far from guaranteed. The AAC should probably hope that San Diego State beats Boise State in a few weeks — but that the Broncos win the rematch in the Mountain West CCG. That would be the best way to take the MWC out of the running.

Also, keep an eye on Toledo. It’s do-or-die as far as an NY6 bid is concerned for the MAC this week, and that all hinges on Toledo’s trip to Miami. The Rockets can win that game, and if they do we will see a ranked Toledo team until the Rockets lose. Looking at the schedule, that might not happen until November, when the Rockets will play their three toughest conference games (Northern Illinois, Ohio, and Western Michigan). If the Rockets get the upset next week, expect to see Toledo ranked around the Top 15 before November comes.

As mentioned, no game may have more impact on the New Year’s Six bowls than Toledo at Miami (Florida). The lineup is considered “weak” next week (after all, College GameDay is going to a city over 200 miles away from the nearest game), but there are gems hidden throughout the schedule. Houston hosts Texas Tech in a game that means a lot to both the Cougars and the AAC as a whole. Texas Tech has a huge offense with the potential to pull off a few Big 12 upsets. A win would show that Houston is still a force to be reckoned with, even without Tom Herman.

There are a bunch of undefeated P5 battles to keep an eye on. These won’t bring eliminations, but they will start to provide separation. Alabama visits Vanderbilt, USC visits Cal, Oklahoma State hosts TCU, Georgia hosts Mississippi State, Penn State visits Iowa, and Washington visits Colorado. All of these games will start to show some separation among teams currently on top of the pack. That might not last long in many of these cases (Vanderbilt and Iowa immediately come to mind), but as of now it’s true.

Lastly, the Big Ten is the only P5 conference that currently has no teams eliminated. That will change next week when Nebraska plays Rutgers, as the loser will be officially eliminated. That would be pretty embarrassing for Nebraska if the Cornhuskers lose this game. Also, I’m going to be keeping an eye on Michigan’s visit to Purdue. The Boilermakers will be eliminated with a loss, but if the Wolverines can’t find consistent offense then that loss might not be such a given.