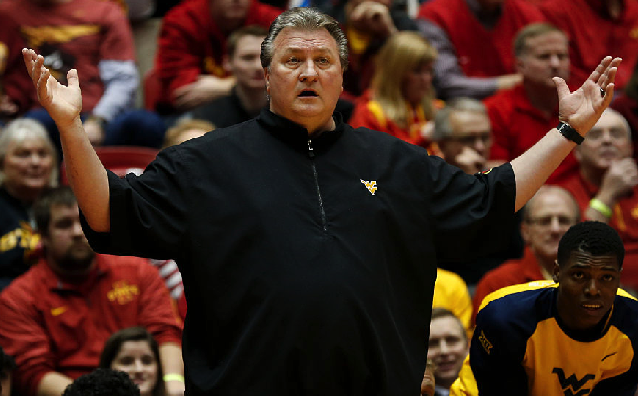 Bob Huggins has always been his own man – and you have to respect that. As college basketball coaches become more corporate looking, corporate talking and corporate shilling, Huggins goes against the grain.

At the ripe age of 63, he is the walking embodiment of Sinatra’s “My Way.” Regrets? Yeah, Huggins has a few. But he’s not going to conform to what others might think a basketball coach should be.

Just look at the way he dresses. Forget the suit and tie. The man’s black pullover has become his trademark. Huggins once said: “I’m not a banker. I’m not a politician. I’m a basketball coach. That’s what basketball coaches wear. They all say to me, ‘I wish I could do that.’”

They don’t make them like Huggins anymore and in his 35th season, the head Mountaineer might finally reach the mountain top.

That’s a surprise. When the Associated Press preseason poll came out, the Mountaineers were ranked No. 20. No one mentioned them as a viable contender: Duke, Kentucky, Kansas and Villanova were clearly the best teams on paper. West Virginia wasn’t even picked to win the Big 12. Kansas seemed poised to claim their 13th straight regular-season championship which would tie UCLA’s conference run from 1967 to 1979.

But in the somewhat topsy-turvy world of college basketball, a lot can change in a short amount time. Rosters fluctuate. Players develop. Surprises happen. With the exception of two hiccups — close losses to Temple and Texas Tech — West Virginia has been the most dominant force this season.

So why were we so slow to come around on West Virginia? First, their non-conference schedule wasn’t very good. In fact, it was among the worst in the nation, rated fourth-worst in the nation by Kenpom.com. They also inexplicably lost 81-77 to Temple in the preseason NIT. That alone is reason for doubt, especially considering Temple is 10-9.

However, the non-conference schedule is where you try to iron out the kinks. Since then, West Virginia has been damn impressive. A few weeks ago, we thought Baylor was the best team in the country. Well, West Virginia smothered the Bears 89-68. The Mountaineers led for all but 51 seconds and never trailed. “Press Virginia” had 15 steals and forced 29 turnovers, which they converted into 29 points.

West Virginia leads the nation in steals (12.6 per game), led by Jevon Carter (3.25) who is third in the country. It is also first in turnovers forced (24.29) and turnover margin (13.3). Huggins said his team charts deflections with the goal of having over 40 in a game.

In last weekend’s 74-72 win at Texas, West Virginia’s defense wasn’t quite as overwhelming (eight steals, 19 turnovers forced). Perhaps more importantly, the Mountaineers found a way to win a close game. The score was tied at 60 with less than seven minutes to play until Carter made some key plays down the stretch.

With the victory, Huggins picked up win No. 806 to tie him with Eddie Sutton for ninth place in Division I history. The next up is Rollie Massimino (808).

An emotional Bob Huggins after career win No. 800: Our hope and our goal is to bring a national championship here. #WVU

West Virginia was 0-2 in games decided by four points or less. To be fair, the Mountaineers were unlucky in those games. It’s quantifiable. According to kenpom.com, they are the fifth-most unlucky top 25 team. They are rated No. 267, which suggests that West Virginia should have one more victory.

The Texas Tech game went into overtime and the Mountaineers lost due to a 3-point field goal with six seconds left. Against Temple, they rallied from a 20-point deficit, but fell 81-77.

West Virginia has balance with four starters averaging in double figures, led by sophomore Esa Ahmad (12.6). It has four top 50 victories, including beating Baylor and winning at Virginia. But for everyone to buy into the Mountaineers, they’re going to have to topple the king of the Big 12.

Is this the year Kansas’ streak finally ends? We’re only midway through January, but guess who sits atop the Big 12 Conference? Yup. You guessed it. No. 2 Kansas (16-1, 5-0). The Jayhawks haven’t lost since dropping the season-opener against Indiana in overtime in Hawaii.

West Virginia will host Kansas on Jan. 24 and the rematch will be Feb. 13 in Lawrence. The last school not named Kansas to win the regular-season Big 12 was Oklahoma State in 2004.

If West Virginia finishes strong, it will position itself for a No. 1 seed in the NCAA Tournament. And the Mountaineers will try to reach the Final Four for the third time in school history.

It would be a tremendous accomplishment in a season where Huggins reached 800 victories. For most of his career – fairly or unfairly – he has been viewed as a villain. That perception dates to his long tenure at Cincinnati where he had a lot of success. If not for Kenyon Martin breaking his leg right before the 2000 NCAA Tournament, the Bearcats might have won the NCAA championship.

Huggins has also had to deal with controversy. There were questions about his graduation rates and he also had an embarrassing DUI incident, complete with video.

He was fired in 2005 after losing a power struggle with the school president. Huggins quickly resurfaced at Kansas State, but was only there one year when the job at his alma mater West Virginia opened up in 2007.

At West Virginia, Huggins has given the school an identity. He got the Mountaineers to the 2010 Final Four by upsetting the John Wall, DeMarcus Cousins Kentucky team in the Elite Eight. At the Final Four, Huggins did a lot for his image when he consoled an injured Da’Sean Butler.

Huggins can do even more for his legacy by finally winning that national championship. This team might be as close as he’s going to get.