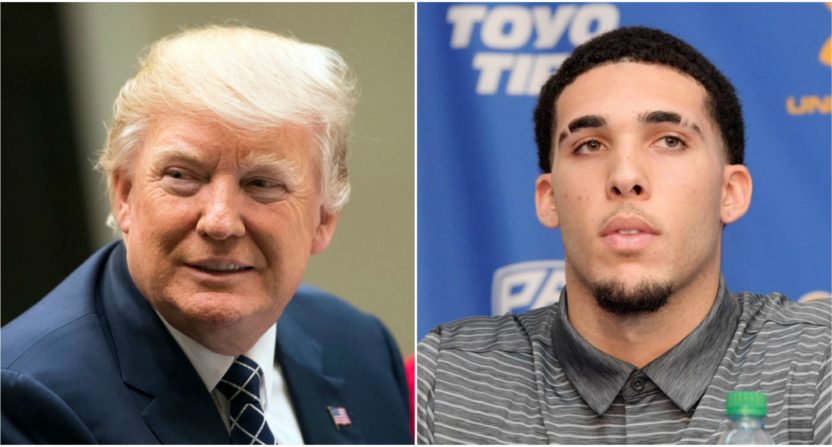 For a few days in November, one of the big stories not only in sports but in the nation was President Donald Trump’s involvement in securing the return home of LiAngelo Ball and two UCLA teammates after they were arrested in China for shoplifting.

At the time, news accounts portrayed Trump as having played a key role in getting the Bruins players back to the U.S., and the president soon demanded (and received) thank yous, which led to a brief feud between the commander in chief and LaVar Ball.

Well months later, a thorough report from ESPN’s Arash Markazi has cast some doubt on exactly how much Trump actually contributed to bringing LiAngelo and company home. The piece is pretty fascinating overall, but we were particularly struck by this passage:

Donald Trump first found out about the situation, according to The New York Times, when members of his staff saw it on CNN just before Trump’s dinner with the president of China, Xi Jinping, in Beijing on Thursday. Trump would later tell reporters on Tuesday, Nov. 14, that he first heard about the situation “two days ago,” at which point he personally asked the Chinese president to look into the matter. The White House did not respond to requests to clear up the timeline, but UCLA sources say they didn’t become aware of Trump’s involvement until Sunday when White House chief of staff John Kelly called the players to say that Trump was intervening on their behalf and that he was optimistic of a quick resolution. A Pac-12 source, who was not present for the actual call from Kelly, confirmed the UCLA sources’ description of the timeline.

“The situation was already resolved by the time we heard about Trump’s involvement,” one team source said. “That’s not to take away from the fact that he got involved, but the players already had their passports back and their flights booked to go home Tuesday night when Gen. Kelly called the players.”

“The players were already checked into the hotel before the public discovered they were arrested,” a team source said. “They also were not under house arrest. It was our decision to keep them at the hotel until the situation was resolved. The charges were dropped, they weren’t reduced, and that happened two days before we heard from Gen. Kelly.”

In Markazi’s telling, UCLA resolved the situation with Chinese authorities two days before Trump’s involvement, with charges against Ball, Jalen Hill and Cody Riley dropped in exchange for a handshake agreement that they would wait in their hotel rooms for several days before being allowed to head home. The school then reportedly asked the players to thank Trump even though they didn’t know what role the president had really played in their release. Via ESPN:

“It just seemed like the right thing to do,” the source said. “Everyone wanted to move on and put this behind us. Why get into it with the president? Let’s not create another story by not thanking him. He had already tweeted about getting a thank you the morning of the press conference, so thank him and move on.”

It’s possible that ESPN’s UCLA sources are wrong and Trump was actually working behind the scenes before he told the school and the world of his involvement. It’s also possible that maybe — and this might be hard to believe — Trump has taken disproportionate credit for something he had little to do with. You can be the judge.