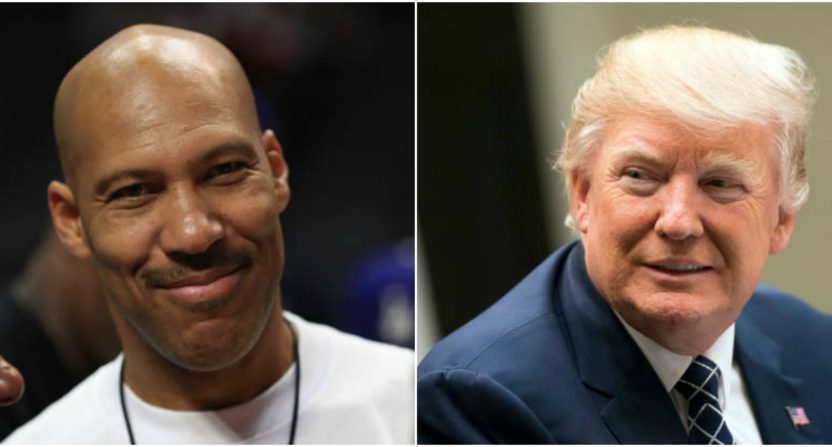 As of Sunday, when Trump called out Ball on Twitter, the feud is on.

Now that the three basketball players are out of China and saved from years in jail, LaVar Ball, the father of LiAngelo, is unaccepting of what I did for his son and that shoplifting is no big deal. I should have left them in jail!

If you are unaware how we got here, allow us to shatter your blissful ignorance.

The saga began when LiAngelo Ball and two of his UCLA teammates were arrested in China for shoplifting from high-end stores. The players reportedly faced years in prison, though few experts expected them to receive a punishment anywhere near that harsh. Trump, who was in Asia on a diplomatic trip at the time, intervened on the players’ behalf, and LiAngelo and company were quickly released. Trump, characteristically, demanded gratitude from the players.

Do you think the three UCLA Basketball Players will say thank you President Trump? They were headed for 10 years in jail!

In fact, the UCLA players did thank Trump for his role in helping them return home, and it seemed the issue would die there.

But LaVar Ball knows a Big Baller Brand publicity opportunity when he sees one, and he had this to say:

“Who?” LaVar Ball had told ESPN’s Arash Markazi on Friday when asked about Trump’s involvement in the matter. “What was he over there for? Don’t tell me nothing. Everybody wants to make it seem like he helped me out.”

On Sunday, Trump fired back with his tweet about Ball being “unaccepting. And let’s just say this is probably the first time a U.S. president has ever said he should’ve left American teenagers in a Chinese prison for shoplifting because one of their fathers wasn’t gracious.

Of course, we already know what comes next. Someone will soon ask LaVar for his response, he will say something inflammatory, and the feud will go on far longer than anyone would ever ask for.

UPDATE: Trump was not done with Ball. He tweeted this Sunday evening:

Shoplifting is a very big deal in China, as it should be (5-10 years in jail), but not to father LaVar. Should have gotten his son out during my next trip to China instead. China told them why they were released. Very ungrateful!