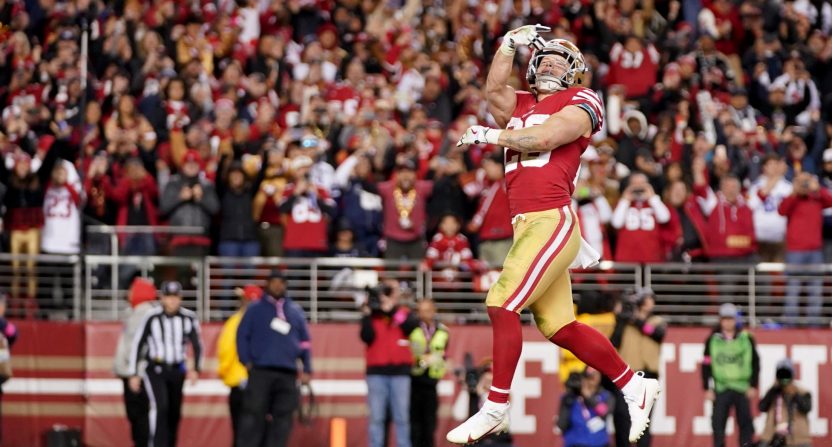 The San Francisco 49ers have been undoubtedly the hottest team in the NFL. They’ve won their last 11 games including a postseason win last weekend over the Seattle Seahawks. Much of this has been due to the excellent play of star running back Christian McCaffrey. The former Pro Bowler yet again proved his worth on Sunday against the Dallas Cowboys by adding to an insane streak.

McCaffrey stepped up when it mattered most for the 49ers. He scored the only touchdown of the game for his team with a two-yard rushing score to extend the 49ers lead to 16-9.

Christian McCaffrey with a rushing TD, and the 49ers take a 16-9 lead in the 4th quarter! 🏈 pic.twitter.com/PHygvZmFUq

This rushing touchdown was obviously extremely significant in the game. But it also speaks to just how impactful McCaffrey has been since being traded by the Carolina Panthers.

This score marks the ninth consecutive game that Christian McCaffrey has scored a touchdown. It puts him in some rare company in 49ers’ history. It’s the longest touchdown streak since Terrell Owens in 1998.

Christian McCaffrey has scored a touchdown in eight straight games, the longest streak by a @49ers player since Terrell Owens in 1998. pic.twitter.com/6qKFYzPGzE

Running backs typically do not demand significant draft compensation in trades like McCaffrey did earlier this season, but he has clearly been worth it for San Francisco.

The NFL world took notice of this insane stat and gave McCaffrey a massive amount of praise for his insane play as of late.

Boy is it nice to have Christian McCaffrey on this roster.

The Cowboys actually did an extremely solid job of limiting McCaffrey on the ground. The defense limited him to just 35 rushing yards on the day.

However, the 49ers’ defense was fantastic in the game. McCaffrey’s score ultimately ended up the deciding factor in the game, winning 19-12 over the Cowboys to advance to the NFC Championship game.

McCaffrey will look to keep his incredible streak intact next weekend against the Philadelphia Eagles with a potential Super Bowl appearance on the line.