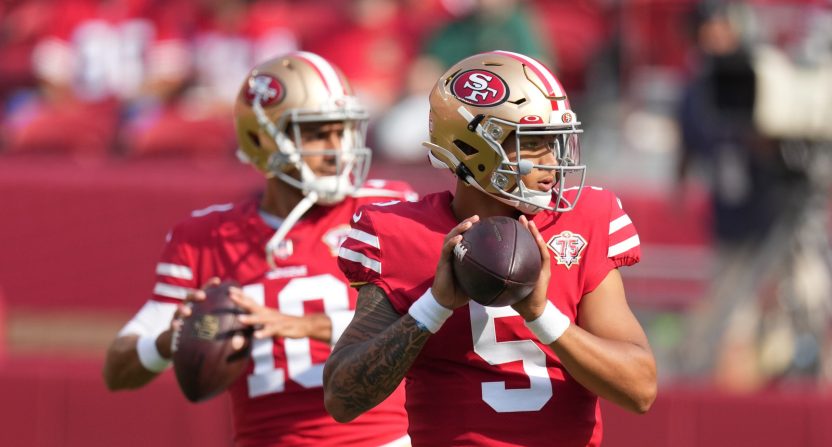 With the 2022 NFL season weeks away, the San Francisco 49ers are ready to transition from Jimmy Garoppolo to Trey Lance at quarterback. If there was any doubt about that going forward, head coach Kyle Shanahan squashed it on Tuesday.

Shanahan and general manager John Lynch held a press conference on Tuesday. In it, Shanahan praised the efforts of Garoppolo but made it clear that Lance will be the man under center when training camp begins on Wednesday.

“Jimmy understands where we’re at,” Shanahan said in a video posted on the team’s Twitter page. “We understand where we’re at. I can’t tell you how appreciative I have been of Jimmy and him being here. I’m so appreciative of what he did for us last year. I think Jimmy and we knew what move we made the year before on that. Jimmy did a hell of a job coming to camp, winning that job and taking us really close to the Super Bowl. But we have moved on to Trey. We’re starting camp out this way.”

Shanahan also said that Garoppolo “would have been traded if the surgery hadn’t happened. It did. He needed to do it. So there’s no ill will there at all. But it’s good to see that he is healthy. But not it’s just seeing how this all will end up”

He added (per Matt Maiocco, NBC Sports Bay Area) that he doesn’t anticipate Garoppolo ever practicing with the 49ers again.

The NFL world, including some teammates of Garoppolo and Lance, reacted to Shanahan’s comments on the 49ers quarterback situation.

#49ers Arik Armstead
"I love Jimmy. Love Trey. I don’t make those decisions. If that’s the decision they decide to make, we’re all with it. Jimmy is here & it was great to see him. He’s a perfect guy to have in this situation to pass that (torch). I’m excited to see what happens"

#49ers Kyle Juszczyk on Shanahan declaring this is "Trey's team" with Lance at QB1:
"It’s not a huge revelation today. But having Kyle concrete say it, I won’t have as many people argue with me about it."

So pumped to watch Trey Lance this fall! pic.twitter.com/JrldEDt7pc

The 49ers have given Garoppolo permission to seek a trade, which has reportedly generated a decent amount of interest. That certainly goes along with what Shanahan said on Tuesday.

Lance will have a lot of pressure as he inherits the job. While young quarterbacks often inherit struggling teams, the 49ers were in the NFC Championship Game last season and minutes away from winning it. While moving to Lance does give the 49ers more youth at the position, it also raises expectations that he’ll be ready to elevate the team’s performance on the field.