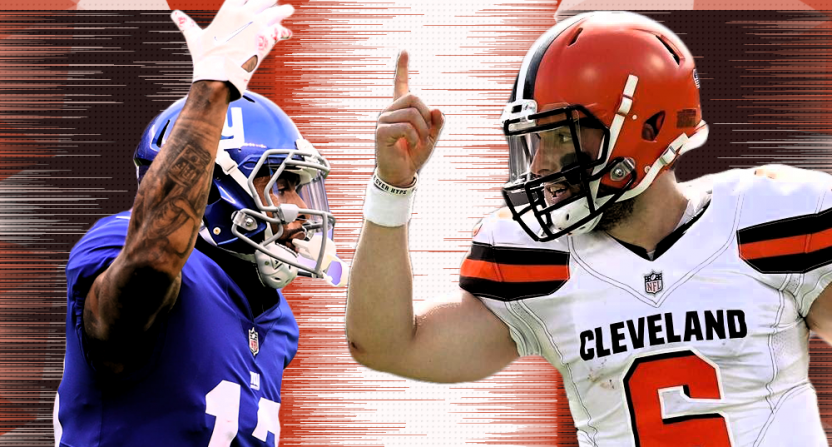 The Cleveland Browns? Super Bowl contenders? In a world in which Donald J. Trump is President of the United States and Lori Loughlin is an alleged criminal mastermind, even that seems a little far-fetched.

Alas, the hype around the Browns is real. And it continues to grow by the day. After building off an impressive rookie campaign of Baker Mayfield and jettisoning Hue Jackson, the Browns made arguably the biggest splash of the 2019 offseason by trading for New York Giants receiver Odell Beckham Jr.

The trade has catapulted Cleveland to Super Bowl contender status. At the Westgate in Las Vegas, the Browns are unbelievably T-5 in Super Bowl odds at 14-1 alongside the Green Bay Packers. The only teams they trail are last year’s Final Four (Patriots, Chiefs, Rams, Saints), and they’re ahead of playoff teams from last year like the Bears, Eagles, Cowboys, and others.

It sounds crazy. It sounds like it’s too much. But when you look at the roster Cleveland has built and just how far they’ve come in a short period of time, maybe it’s not completely out of the realm of possibility.

Here are five reasons why the Browns can be legitimate Super Bowl contenders in 2019:

It all starts and ends with Baker Mayfield. Without him, the hype surrounding the Browns doesn’t exist and the question around the signal-caller would be the black cloud over the franchise it always has been. Cleveland has searched for a franchise quarterback for decades and the list of potential saviors is endless, stretching from Tim Couch to Johnny Manziel to Kelly Holcomb and everyone in between. But not since Bernie Kosar have Browns fans actually had a quarterback like Mayfield to get excited about.

Mayfield set the single-season rookie record with 27 touchdown passes in spite of not even starting the season as the Browns’ quarterback (thanks Hue Jackson). Once he was finally injected into the lineup, he immediately injected a confidence and swagger that hasn’t existed since the Browns came back in 1999. One could even argue that Mayfield’s presence makes Cleveland a destination franchise, one that a player the caliber of Beckham can be traded to without much fuss. Mayfield’s numbers should only grow in Year 2 with the support of new head coach and former coordinator Freddie Kitchens, and the riches of skill position talent now surrounding him.

Speaking of Beckham, his acquisition immediately transforms Cleveland’s offense and gives the Browns something they also haven’t had much of in recent years- a true #1 receiving target. Since returning in 1999, the Browns have only had two Pro Bowl wide receivers: Braylon Edwards in 2008 and Josh Gordon in 2014. Aside from Gordon’s breakout season before his career went off track, any of Beckham’s first three seasons in the league would have gone down as the as the greatest in franchise history.

In Cleveland, Beckham will not only join forces with former LSU teammate Jarvis Landry as the Browns’ top two receivers, but also former college receivers coach Adam Henry. Suddenly, the combination of Beckham, Landry, Antonio Callaway, and David Njoku gives the Browns one of the most talented receiving corps in the entire NFL.

In giving up a first-round pick, third-round pick, and Jabril Peppers, the Browns are finally putting some of their amazing capital of draft picks to use in acquiring top-level talent. Cleveland can have Sashi Brown to thank for some of that, and in truth, it’s the implementation of the plan that was laid out a few years ago.

Don't forget that this was all possible because of Sashi Brown.

Shed all their salaries. Completely stocked their cupboard full of draft picks. When those draft picks hit (Myles Garrett, Baker Mayfield) they had legit stars on rookie contracts and were able to spend in FA/trades

The Browns hit rock-bottom. Hard. But they did so with an actual vision and purpose in mind of being able to amass enough top level picks to either turn it into their own talent (Mayfield), or use it in trades to get talent from around the league (OBJ). John Dorsey may get all the credit now as the current GM, but if we can borrow a phrase from another rebuilding team in another sport, Browns fans may be rewarded for trusting the process.

For as much praise as Dorsey has gotten for the Beckham trade, let’s not forget another major acquisition by the Browns that brought much more controversy. Cleveland signed Kareem Hunt as a free agent back in February, after he was released by the Kansas City Chiefs once video of him assaulting a woman in a hotel came into public view.

The move was met with much criticism, and rightfully so. It feeds into every bit of skepticism about the NFL. For as much as the NFL wants to put forward the message that it takes domestic violence and violence against women seriously, it doesn’t matter as much as wins and losses. Nowhere is that more clear than in this case. Dorsey was Hunt’s GM in Kansas City, and he’s betting his entire reputation on this signing and the belief that Hunt can turn his life around and become a model citizen.

Whenever he does return from suspension, Hunt will definitely be an asset on the field for the Browns offense. Partnering 2017’s leading rusher with promising rookie Nick Chubb (who almost had 1,000 yards last year himself) also gives the Browns one of the most talented backfields in the league. Unfortunately, it will come at a significant cost for the franchise from a public relations standpoint. Whatever success the Browns do have this season will always be clouded by the decision to sign Hunt and putting those wins above everything else.

While much of the focus has been on the new players coming to Cleveland this offseason, the existing talent on the Browns roster is maybe even more reason to get excited for Browns fans.  With the NFL’s tight salary cap, any team needs to lean on young players playing on their first contracts to contribute in a major way. Up and down the roster, the Browns have second, third, and fourth-year players that have continued to grow.

Former #1 pick Myles Garrett looks every bit the stud that he was thought to be, and him book-ending new acquisition Olivier Vernon gives Cleveland a fearsome pass rush. Denzel Ward is the latest OSU cornerback to make a big impression in the league, and he should be a centerpiece for the Browns defense for years to come. Pro Bowler Joe Schobert has been a revelation at linebacker. Then there are the skill position players that will be a nightmare for every defensive coordinator on the Browns’ schedule.

Sashi did this. #NeverForget

Make no mistake about it, Cleveland is loaded and has a complete roster.

This may be the most important hurdle for the Browns to overcome. The team has been a punchline and the laughing stock of the league for years. Even after years of disappointment, their 1-31 stretch under Hue Jackson from 2016-2017 made Browns fans wonder how it could possibly get much worse. No team, perhaps outside the Tampa Bay Buccaneers of the 1970s, had ever sank so low in NFL history. Climbing out of those depths is what made last season’s 7-8-1 mark so impressive and gives the Browns so much hope this season.

And it’s truly amazing that the Browns have seemingly turned it around so quickly. But the pieces have rapidly fallen into place. In less than a year, Cleveland jettisoned arguably the worst head coach in league history, found their franchise quarterback, and landed one of the best receivers in the league. One remaining question mark could be that Freddie Kitchens is untested as a head coach, but almost any living organism wearing a headset would be an improvement on Jackson. Kitchens also has an established relationship with Mayfield that clearly works.

If it feels like all this optimism has sprung up overnight, well, it has. And maybe they haven’t quite earned their lofty status as Super Bowl favorites having not put a winning season together since 2007, but these are not your older sibling’s Browns. A new era has arrived in Cleveland. And it may finally bring a winner.