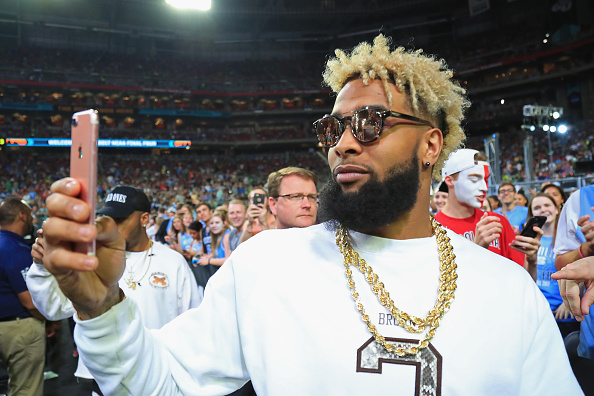 The Cleveland Browns have made one of the splashiest moves of this NFL offseason so far, trading their first-round pick this year (17th overall), safety Jabrill Peppers and one of their two third-round picks this year for New York Giants’ receiver Odell Beckham Jr. NFL Network’s Mike Garafolo first reported the trade:

BREAKING: The #Browns have traded for #Giants WR Odell Beckham, sources say. The deal is done. I am not joking.

ESPN’s Adam Schefter provided details on who was involved:

From the outside, that doesn’t seem like a ton for a top receiver like Beckham, especially considering that he’s still under contract for another four years. Yes, Beckham himself was a 12th-overall pick back in 2014, so it’s not inconceivable you could get a great player at 17th overall, but plenty of players picked in that rage turn out to be average at best, not three-time Pro Bowl picks like Beckham.

And yes, Peppers is a former first-round pick himself (25th overall in 2017), but he hasn’t exactly dominated the league so far (with no Pro Bowl selections to date), and one of his most notable moments comes from an ESPN Cleveland contributor being fired for saying he was “on the lean and the molly.” And the third-round pick doesn’t seem like a huge loss either, especially considering that the Browns have two picks in that round this year. Oh, and the Giants are on the hook for much of Beckham’s salary this year when it comes to the cap:

Odell Beckham will still count for $16 million against the Giants’ cap while playing for the Browns next season.

It seems pretty silly for the Giants to actually trade Beckham. Yes, New York media outlets have feasted on creating all sorts of scandals around him, especially when it came to spending a bye week on a boat, and yes, not everyone there likes him. But he’s proven to be one of the top receivers in the NFL year after year, and it feels worth it to hang on to that guy, especially after you have him locked up for multiple years. Trading him feels problematic on a lot of levels, as we wrote last offseason. And while this return isn’t the worst in the world, it’s certainly not overwhelming enough to make this an obvious move for the Giants. Don’t let that dissuade the likes of WFAN’s Mike Francesa, though, someone who’s complained about Beckham for years.

We can argue about compensation but Beckham trade is best thing that could happen to Giants. He just never got it.

But Francesa surely expected this all along, right? Right?

Mike Francesa assures us that the Giants can't get rid of Odell Beckham with that contract. This was three hours ago. pic.twitter.com/Ut8SozRDxS

Meanwhile, Beckham gets to go on to Cleveland, and to reunite with former LSU teammate Jarvis Landry and team up with exciting young quarterback Baker Mayfield. And the Browns just got even more interesting, especially considering turmoil in their division after Antonio Brown’s exit from the Steelers. We’ll see how this works out for them, but there’s a fair bit for Browns’ fans to be excited about here. And this is more disappointing for Giants’ fans, who have now lost a star without an overwhelming return.