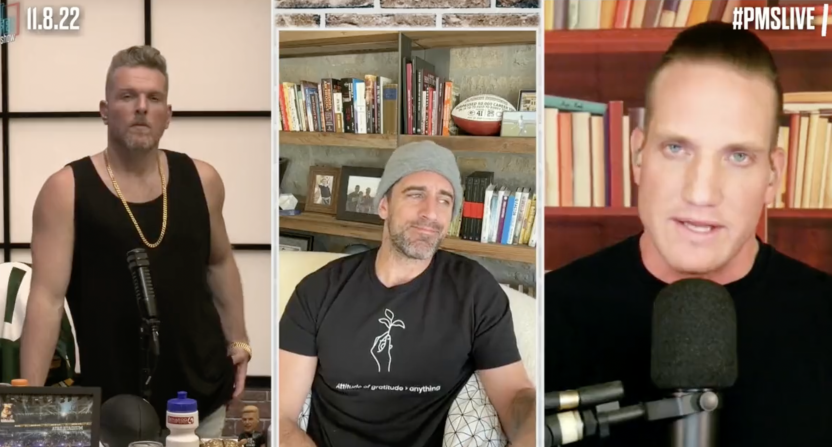 There’s no denying that Green Bay Packers quarterback Aaron Rodgers is a generationally talented NFL player. But even he had to admit that he can have a pretty bad day and take the blame for it, right?

The @Lions get another goal line stop! @aidanhutch97

Rodgers has a brutally bad day on Sunday when he threw three interceptions, all of which were in or near the endzone, in a 15-9 loss to the one-win Detroit Lions. While not everything on the day was Rodgers’ fault, given the struggles that the offense has had this season, it might be assumed that, as a team leader, Rodgers would fall on his sword and accept responsibility for the poor performance.

Then again, have you met Aaron Rodgers?

On his weekly appearance on The Pat McAfee Show, Rodgers was asked about the interceptions and criticism he’d received over them. Instead of using the opportunity to say he had a bad day, he seemed to imply that there were other factors involved and that he was simply part of a larger issue amongst his teammates.

"Two of the interceptions weren't great throws.. I've thrown TD passes many times & I don't give a shit what any of these experts on TV have to say" ~@AaronRodgers12#PMSLive pic.twitter.com/RCaIXRbzMC

“Well there’s a lot that goes into all those things,” said Rodgers. “What I can control, you know, two of them, weren’t great throws. You know, there’s some other parts to plays. Usually, it’s not just on one person. There’s a lot that goes into each play that either could avoid some of that thing or sometimes guys can screw parts of the play up and you can make a great throw and make up for all of it.

I’ve thrown touchdown passes many times, I don’t give a s*** what any of these experts on TV have to say.”

Rodgers also didn’t want to give the Lions too much credit for beating the Packers, noticeably wincing when A.J. Hawk says the Detriot defense played “great” against them.

"I don't think the Lions really stopped us.. it was more about us making mistakes" ~@AaronRodgers12#PMSLive pic.twitter.com/CoeeY9XMY9

“I didn’t play a great game. We still made a lot of mental mistakes. But I don’t think that really stopped us. We had three possessions in the first half and went up and down the field. So, it’s more about us than them.”

But remember, it’s all about positivity, guys.