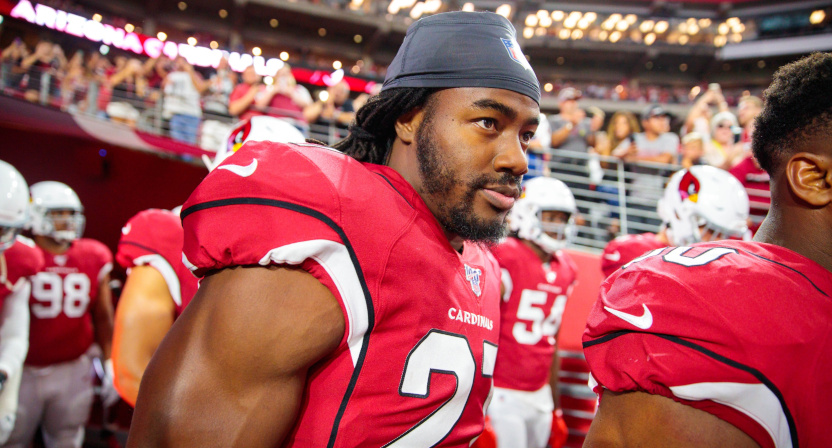 There have been all sorts of NFL suspensions, for both on–field and off–field matters, but Arizona Cardinals’ cornerback Josh Shaw was handed one for an unusual reason Friday: gambling. Specifically, Shaw was suspended indefinitely through at least the 2020 season for “betting on NFL games on multiple occasions this season.” Here’s more on that from ESPN’s Josh Weinfuss:

The NFL’s investigation into Shaw did not uncover evidence that indicated he used inside information or that any game was compromised. The NFL also announced that Shaw’s teammates, coaches or other players around the league were not aware of Shaw’s gambling.

“The continued success of the NFL depends directly on each of us doing everything necessary to safeguard the integrity of the game and the reputations of all who participate in the league. At the core of this responsibility is the longstanding principle that betting on NFL games, or on any element of a game, puts at risk the integrity of the game, damages public confidence in the NFL, and is forbidden under all circumstances,” NFL commissioner Roger Goodell said. “If you work in the NFL in any capacity, you may not bet on NFL football.”

…Betting on football is one of 10 restrictions on legal gambling that the NFL laid out in its gambling policy.

Shaw was put on injured reserve on Aug. 25 with a shoulder injury, and he hasn’t played a down for the Cardinals this year or been around the team much, so it’s possibly correct that he didn’t use inside information or find a way to compromise games. (It should be noted that the NFL comment there is just that they didn’t find evidence of that, though, not that that didn’t happen.) But this is still a big perception problem for the NFL, especially with the expansion of legalized gambling and with the discussion about leagues demanding “integrity fees” (that’s MLB and the NBA at the moment, but it could wind up applying to the NFL as well if those leagues are successful) to not oppose legalized gambling in states.

Gambling scandals can be a huge problem for leagues. Fallout from the Tim Donaghy scandal fallout is still felt in the NBA, the 1978-79 Boston College point-shaving scandal is still discussed in college basketball, and the 1919 “Black Sox” scandal is still a subject of debate in MLB circles. This isn’t on the same level of those, and Shaw (especially during a season where he was injured the whole time) presumably wouldn’t have had the power to affect games in the same way as the participants in those other scandals, but this still isn’t a good look for the NFL, and it’s understandable why they handed Shaw such a heavy suspension.

This isn’t the first time that Shaw has run into some unusual trouble. Back in 2014 while he was playing for the USC Trojans, Shaw lied to the school about how he suffered two high-ankle sprains. He said that happened because he jumped from the balcony of his third-story apartment, which was true, but the lie was that he claimed he was trying to rescue a drowning nephew. Instead, that jump came in an attempt to avoid police after a verbal argument with his girlfriend saw the police called.

Shaw was suspended by USC after that, but then was reinstated that November. He played in the final three games for the Trojans and was then drafted by the Cincinnati Bengals in the fourth round of the 2015 draft. He’s been in the NFL since then with Cincinnati, Kansas City, Tampa Bay and now Arizona, where he signed a one-year deal worth $850,000 in March. But his NFL future is definitely in question after this.