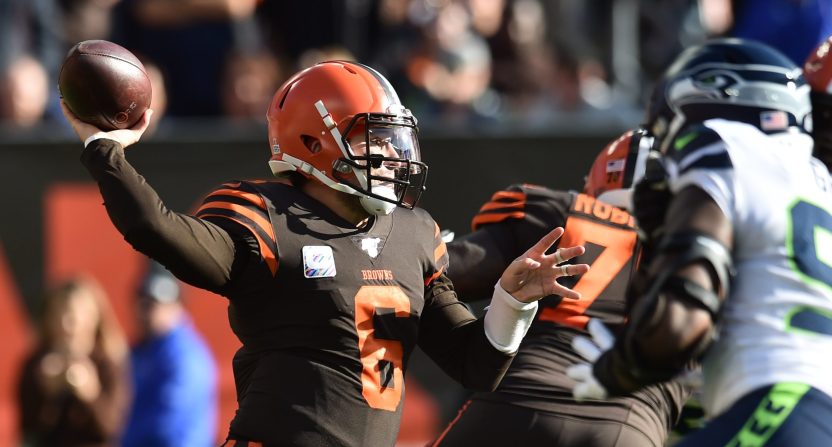 Tanking is an ugly word in sports. It’s one of the worst things you can accuse someone in athletics of doing. And yet, tanking happens all the time in plain sight. Franchises will call it “future financial flexibility,” “restructuring,” or “reloading.” It all means the same thing. Effectively giving up on a season, sometimes before it begins.

Let’s be clear. Coaches and players don’t tank. Especially in the NFL where most player contracts are not fully guaranteed, and coaches have little job security. But organizations certainly make strategic decisions that affect the ability to win. Such as trading Russell Wilson, the greatest quarterback in Seattle Seahawks history.

There’s no replacing Wilson. But if the Seahawks acquire Baker Mayfield, that would show everyone that they are not giving up on 2022. Because so far it looks like they are punting on the season in pursuit of a high draft pick.

You could make a case that Seattle is the worst team in the league heading into the season. And many have.

According to the Action Network, the Seahawks are tied with the New York Jets for the third-lowest win total (5.5). Pro Football Focus has Seattle dead last in its power rankings. And ESPN’s Bill Barnwell said the Seahawks had the worst off-season of any team.

The Wilson trade may have shifted the balance of power in the AFC West; the Denver Broncos are now a serious threat to the Kansas City Chiefs. It also probably puts the Seahawks in the basement of the NFC West for the foreseeable future.

Seattle cannot seriously say they expect to compete with either Geno Smith or Drew Lock. If either of those guys quarterbacks your team, something horrible has gone wrong. While wins and losses aren’t the best way to evaluate a quarterback, Smith is 13-21 as a starter and Lock 8-13.

The fact that Seattle head coach Pete Carroll described both recently as “really impressive” is laughable. Seattle competes in a division where the other three teams made the playoffs and two reached the NFC Championship game. The Los Angeles Rams have Matthew Stafford. The Arizona Cardinals have Kyler Murray. The San Francisco 49ers have Trey Lance. All former first-round draft picks.

According to @NextGenStats this touchdown from Baker Mayfield had the most air yards of any pass in the 2021 season, a whopping 66.4 yards. pic.twitter.com/KnfvdnA3Jq

Seattle should bring in a former No. 1 overall pick. CBS Sports’ Josina Anderson reported that the Seahawks “still have a high level of interest in acquiring QB Baker Mayfield and behind-the-scenes are open to contractually extending him, per league source.”

Mayfield might be more tradeable now. According to Sports Illustrated’s Albert Breer, the Cleveland Browns are willing to pay half of Mayfield’s salary. That would make him extremely attractive to teams in dire need of an established starter. The market for Mayfield appears to be between the Carolina Panthers and Seattle. If the Seahawks add him, they might go from potentially terrible to possibly respectable.

Say what you want about Mayfield. He never lived up to the hype as the top overall pick in the 2018 draft. But he’s a competent quarterback who helped deliver the Browns’ first playoff victory in 26 years.

The #Browns have played five minutes and change in their first playoff game in nearly two decades.

Sure, Mayfield was disappointing in 2021. He had the second-lowest passer rating (83.1) of any quarterback who started at least 14 games. Only Jacksonville Jaguars rookie Trevor Lawrence (71.9 in 17 games) was worse. It’s also important to remember that Mayfield played with multiple injuries, including a torn labrum in his left (non-throwing) shoulder.

Mayfield only lost his job because the Browns desperately wanted Deshaun Watson. For a team like Seattle, which has good wide receivers in Tyler Lockett and DK Metcalf (assuming he isn’t traded), Mayfield (29-30 as a starter with 92 touchdown passes to 56 interceptions) would give the Seahawks a puncher’s chance to finish with a winning record.

If Seattle fails to land him, it might be competing for the No. 1 overall pick in 2023. That would confirm what we suspected all along: the Seahawks are giving up on this season.