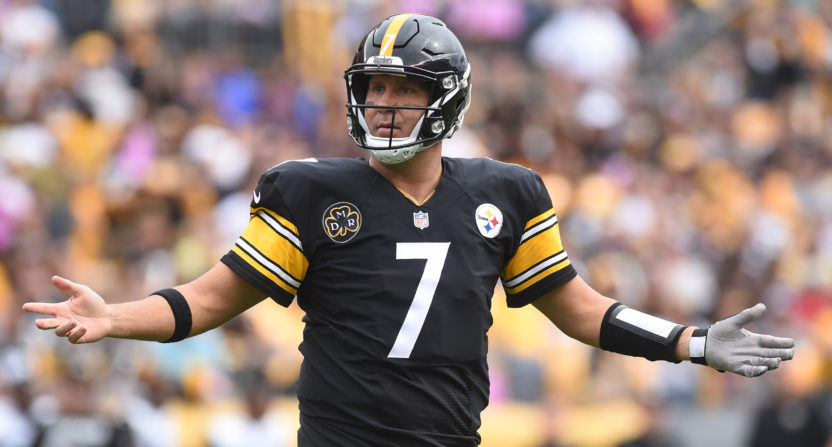 Ben Roethlisberger generally comes across as a moron at best, and a downright awful human being at worst, so to have his name in the headlines for saying something dumb isn’t exactly a surprise.

This time, Roethlisberger has spoken out on Pittsburgh’s draft class, specifically third-round quarterback selection Mason Rudolph. Roethlisberger had already said he wasn’t interested in playing the mentor role, and that he planned on playing another three-to-five seasons. That’s a fun turnaround given his own retirement speculation from not that long ago.

It’s almost like the team is loading up on potential replacements because they have no idea what Roethlisberger is going to decide to do at any given moment, whether it’s announcing retirement or throwing five interceptions.

Today, he went on a local radio show and trashed the team’s decision to draft Rudolph at all. Via NFL.com:

In a Friday morning interview with KDKA’s Cook and Poni in Pittsburgh, Roethlisberger expressed further displeasure, questioning the allocation of resources toward another potential quarterback of the future.

“So, I was surprised when they took a quarterback,” Roethlisberger said Friday, “because I thought that maybe in the third round, you can get some really good football players that can help this team now. And nothing against Mason, I think he’s a great football player … I just don’t know how backing up or being the third guy, who knows where he’s going to fall on the depth chart, but helps us win now.”

A generous assessment of Roethlisberger’s reaction would concede that he’s simply being overprotective of his mates in the 2017 quarterback room, Jones and Dobbs.

“Those two guys are who I feel the worst for,” Roethlisberger offered. “I’ll be honest, I wasn’t worried about [Rudolph] coming and taking my job. I feel confident that I can go out and beat whoever I need to beat out for my job. … I do feel bad for those guys.

“I don’t know what’s going to happen. I assume Landry’s still the two, I don’t really know. And Josh, same thing. Last year you take him in the fourth round, so does that mean the Steelers screwed up in that pick? Like do they think that he wasn’t the one that they thought, or has he not developed the way they thought? Why else would you take a quarterback in the third round the next year?”

This isn’t to say that a player isn’t allowed to be critical of his organization in the media. It might not be advisable sometimes, but there’s nothing wrong with honest assessments; we criticize players for giving the same rote responses all the time, and this is most definitely not that.

But at the same time, this is Ben Roethlisberger we’re talking about. His team has supplied him with more talent than just about any other organization throughout Ben’s tenure (only Tom Brady has a definitely superior case throughout the era), and at a certain point it’s just a bad look to air your grievances like this, especially given the message it sends to Rudolph.