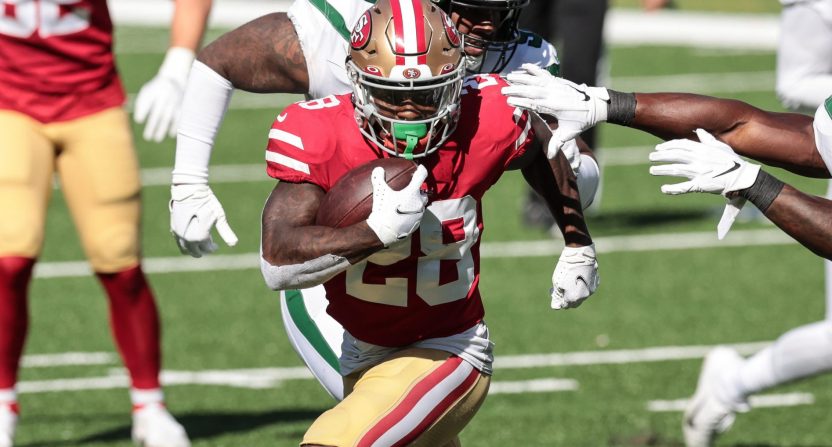 Week 2 of the 2020 NFL season marked one of the most injury-ravaged weekends in recent memory. Whether your fantasy team took a hit as a result of one or more of those injuries, or whether you just regret some draft-day decisions, you might be looking at the waiver wire right about now. Here are some players to consider ahead of Week 3.

San Francisco 49ers RB Jerick McKinnon: The 49ers lost both Raheem Mostert and Tevin Coleman to Week 2 injuries, which should leave most of the backfield work to McKinnon and Jeff Wilson. The speedy former Minnesota Viking rushed for 77 yards in the opener. You might also want to add Wilson just to be safe.

New York Giants RB Wayne Gallman: Don’t expect Saquon Barkley’s replacement to put up starting-caliber numbers, but he has the talent to produce at a semi-satisfactory level if you’re in a bind at the running back position.

Update: The Giants are reportedly signing veteran running back Devonta Freeman. While it’s unclear what he has left in the tank (averaged 3.6 yards per carry last year with the Atlanta Falcons), he’s likely to be the Giants’ feature back before long and is their one to target on the waiver wire.

Carolina Panthers RB Mike Davis: He’s even less enticing than Gallman, but the veteran is likely to be benefit the most from Christian McCaffrey’s injury. Davis caught eight passes out of the backfield for 74 yards in Week 2.

Denver Broncos WR KJ Hamler: Jerry Jeudy is likely already on a roster, but Hamler should get plenty of opportunities now that Courtland Sutton is out. The rookie second-round pick was targeted seven times in Week 2.

New Orleans Saints WR Tre’Quan Smith: He goes here just in case he slipped under the radar with Michael Thomas’ status up in the air last week. With Thomas out, Smith caught five passes for 86 yards Monday night in Las Vegas.

New York Jets WR Braxton Berrios: The Jets are getting hammered by injuries at the skill positions and somebody has to catch some balls. Berrios flashed in Week 2 with six catches for 59 yards and a touchdown. Berrios and Chris Hogan should be added to any roster that’s short on receiver depth.

Jacksonville Jaguars WR Keelan Cole: Cole followed up a strong Week 1 showing with an even more productive performance Sunday against the Tennessee Titans. He has scored in back-to-back weeks, and he’s getting more attention than DJ Chark in that receiving corps.

Tennessee Titans WR Adam Humphries: At least keep an eye on the veteran safety valve. He has caught at least five passes for 45 yards in back-to-back weeks, and he scored Sunday against Jacksonville.

Indianapolis Colts TE Mo Alie-Cox: The 27-year-old vet went over 100 yards with Jack Doyle down in Week 2, so he’s worth a flier here. Don’t forget the Colts’ passing game will also be without Parris Campbell now too.