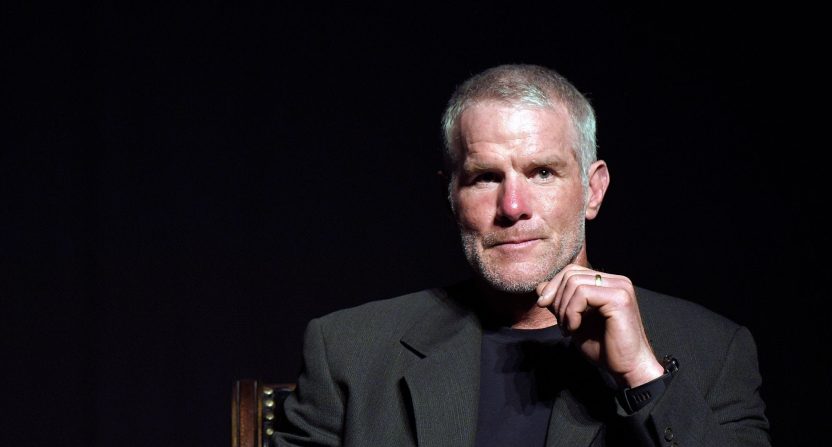 Brett Favre and texting never go well together and it appears he might have gotten himself in trouble once again as more details have been uncovered in the investigation into a Mississippi welfare fund that the NFL Hall of Famer seems to have benefitted from.

To catch us up, according to a court filing in July, former Mississippi Governor Phil Bryant directed a woman whose nonprofit received millions in subgrants from the Mississippi Department of Human Services welfare department to give Favre $1.1 million. The revelation came courtesy of Mississippi Today, which has been covering Favre’s involvement since it first reported in October that the former Green Bay Packers quarterback had been told to return $828,000 that he received from welfare funds that should have gone to needy families. Favre reportedly repaid around $600,000 but not the rest, which was considered interest.

The entire ordeal, which has been referred to as “the largest public embezzlement scheme in state history,” also includes other angles from which Favre stood to benefit. The former Green Bay Packers quarterback also wanted a $3.2 million grant to a drug company that he was an investor in and a $5 million award to build a volleyball arena at the University of Southern Mississippi from the former Mississippi governor, whom Favre said in texts that he would like to award shares in the drug company to while he was still governor.

Per Mississippi Today, as part of the state’s ongoing civil lawsuit, texts showing Gov. Bryant pushing to make Favre’s volleyball idea a reality were revealed in further detail. The texts show Bryant guiding Favre on how to write a funding proposal so that it could be accepted by the Mississippi Department of Human Services.

“Just left Brett Favre,” Bryant texted nonprofit founder Nancy New in July of 2019. “Can we help him with his project. We should meet soon to see how I can make sure we keep your projects on course.”

When Favre asked Bryant how changes at the agency might impact their ability to get funds for the volleyball stadium, Bryant assured him, “I will handle that… long story but had to make a change. But I will call Nancy and see what it will take.”

What’s the point? The point is that it appears that Bryant, Favre, and others worked together to siphon off at least $5 million of the state’s welfare funds to build a new volleyball stadium at the University of Southern Mississippi, where Favre played football and his daughter played volleyball. Not only did that end up happening but Favre received much credit for raising funds to build the facility.

Favre’s lawyer confirmed last week that the FBI has spoken with the quarterback about the matter. No charges are pending against him but we’ll see what other information is surfaced through the lawsuit and whether or not that leads to any legal concerns.

In the meantime, the court of public opinion is making its thoughts on Favre and the others allegedly involved known.

somewhere between 1/4 and 1/3 of Mississippians live in poverty.
min wage in the state is $7.25/hr.
it ranks 45th nationally in education.
its capital city is (still) without drinkable water.

and the former governor funneled $5M in welfare funds to a volleyball arena for Favre. https://t.co/2YblMV9rzb

The Mississippi welfare scandal gets worse and worse for former Gov. Phil Bryant and Brett Favre with every new revelation. @ayewolfe has crushed this story and deserves a Pulitzer for opening up Pandora's box of corruption implicating the most powerful people in Mississippi. https://t.co/9mhCmAQ6md

They should be in prison… https://t.co/m9RVP6CMNQ

Is there a single honest Republican out there? All I can see are criminals. https://t.co/P8wazdLwLl

Brett Favre is not a good person at all lmao https://t.co/rnM3uOaoeR