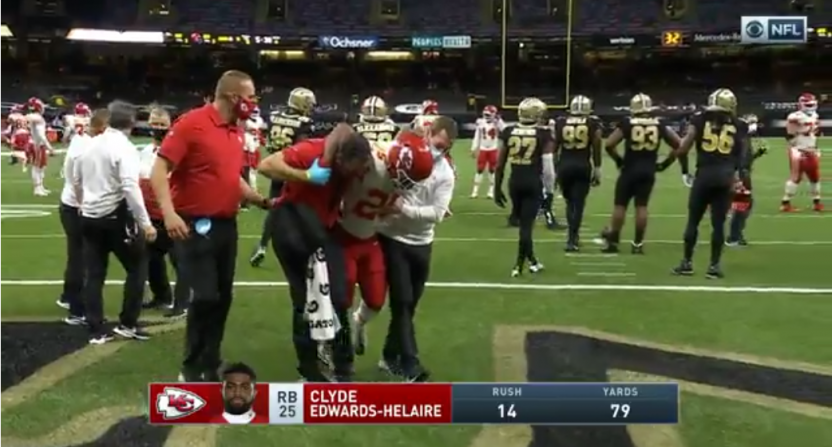 The defending champion Kansas City Chiefs took a big step closer to securing a first-round bye with a 32-29 road victory over the New Orleans Saints on Sunday. The Chiefs had a 29-15 lead in the fourth quarter before the Saints got two late touchdowns, but ultimately held on for the victory (and a crazy play in which the Saints blew a chance for a touchdown, instead settling for a safety, ended up being big).

Kansas City is now 13-1, and odds are strong that they just lock up the No. 1 seed — the only seed that has a bye in this year’s playoff format — on their own, with games remaining against the Atlanta Falcons (4-10) and Los Angeles Chargers (5-9). They currently have a 1.5-game lead over the Pittsburgh Steelers, who have lost two straight games and still have tough games remaining against the Indianapolis Colts (10-4) and Cleveland Browns (9-4).

So, that’s all good for the Chiefs, but Sunday’s win also featured an injury that did not look good for a key piece of the offense.

Rookie running back Clyde Edwards-Helaire suffered a leg injury after finding himself in a very awkward position at the end of a run in the fourth quarter.

The LSU product couldn’t put any weight on the leg as he was helped to the locker room.

This does not look good for Clyde Edwards-Helaire. pic.twitter.com/q45Y8nf85q

The good news is that x-rays came back negative, according to Chiefs head coach Andy Reid.

Clyde Edwards-Helaire "got twisted up into the splits," per Coach Reid. X-Rays were negative. They'll evaluate him as they go.

But there’s surely an MRI and more tests coming for Edwards-Helaire. And even if it’s nothing serious, the Chiefs will surely be cautious to make sure they have Edwards-Helaire at full strength in the postseason.

Edwards-Helaire had 14 carries 79 yards (5.6 AVG) on Sunday, and entered the game with 167 carries for 724 yards (4.3 AVG) and four touchdowns, to go with 35 receptions (one for a touchdown). If Edwards-Helaire is to miss time, that could mean a much bigger role for Le’Veon Bell going forward. The 28-year-old had 15 carries for 62 yards (both season-highs) and one touchdown on Sunday, and entered the game averaging 3.9 yards per carry.

The Kansas City offense will still be great no matter who Patrick Mahomes has to hand off to, but the offense is even more lethal with a quality running threat.