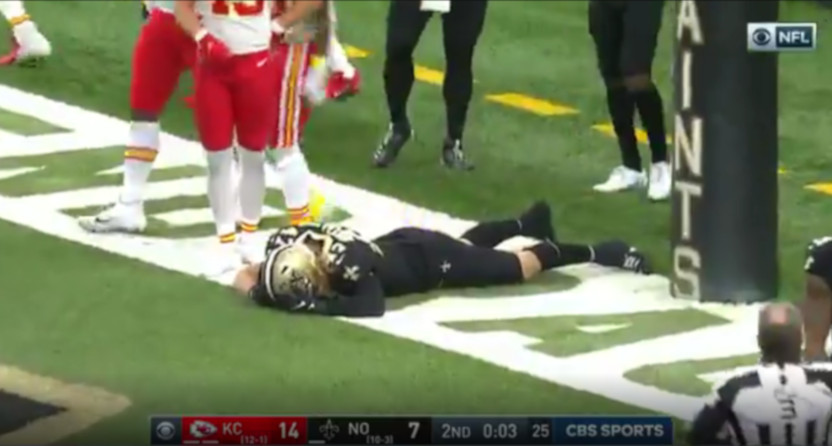 There’s been a lot of discussion about gambling “bad beats” in the past few years, helped by both the expansion of legalized sports betting and by increased coverage of sports gambling (including Scott Van Pelt’s “Bad Beats” segment on his ESPN SportsCenter with Scott Van Pelt show). The play that happened at the end of the first half between the New Orleans Saints and the Kansas City Chiefs Sunday doesn’t quite qualify as a bad beat, given that the most probable result before the strange play (the first half hitting the under of 26.5) was what wound up happening in the end. However, this one (which saw Saints’ LB Alex Anzalone dive towards a fumbled punt in the end zone with five seconds left and look to have a touchdown from that, but prove unable to hang on, resulting in a safety) was still worth noting from a gambling perspective. It briefly made it look like those over bettors were about to cash in, but the eventual touchback meant the score was 14-9 going into halftime rather than 14-14, and the under bettors were still rewarded.

Tough one if you had 1H over (26.5) in Chiefs-Saintspic.twitter.com/8azZUsXZdV

This is one that might wind up having an impact on the game, too; as of 7 p.m. ET, the Chiefs were up 21-15 in the third quarter. So if they go on to win, the Saints may well regret the missed opportunity here.

Update: And they did wind up regretting that:

So this play wound up mattering for bettors, and also for the eventual result of the game.