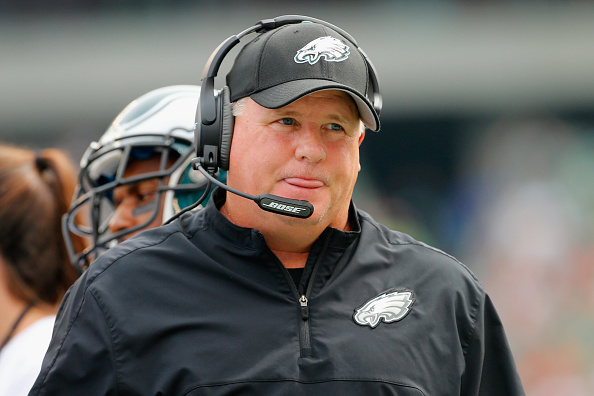 CSN Bay Area’s Matt Maiocco reports that the San Francisco 49ers have met with Chip Kelly in regards to their head-coaching vacancy.

Source: The 49ers have met with former Eagles coach Chip Kelly about the head-coaching job.

Kelly was fired by the Philadelphia Eagles with one week left in the regular season, after going 26-21 in three seasons with the team. Before that, he was the Oregon Ducks’ head coach for four seasons, going 46-7 and annually having one of the most explosive, high-scoring offenses in the country.

But, there were questions about Kelly’s offensive system — particularly its uptempo pace and demands — translating to the NFL. Additionally, there have been reports that Kelly’s people skills and ability to relate with players played a large part in Philadelphia’s decision to fire him.

The 49ers have a head-coaching position open after firing Jim Tomsula on Sunday. Tomsula had taken over as San Francisco’s head coach a year ago, which of course followed Jim Harbaugh’s departure from the organization. San Francisco went 5-11 in 2015, but with a brutal roster that never gave Tomsula a chance.

That’s another thing: the 49ers don’t appear to have a long term quarterback on the roster. Or at least one anybody should be confident in.

Colin Kaepernick was very disappointing in 2015, and has had multiple surgeries already this offseason. Maybe in Kelly’s system Kaepernick could look like the quarterback he was in 2013, but that’s a big question mark. And Blaine Gabbert showed some good things down the stretch, but not enough to feel like he’s the answer there.

San Francisco is naturally being linked to a quarterback at the No. 7 overall pick of the upcoming draft, but the top prospects like Jared Goff and Paxton Lynch could be gone by that pick if their stock rises leading up to the draft. A head-coaching candidate like Kelly may need to be sold that the 49ers have a plan at quarterback in place — or be sold they can turn Kaepernick around — to accept this job if it’s offered to them.