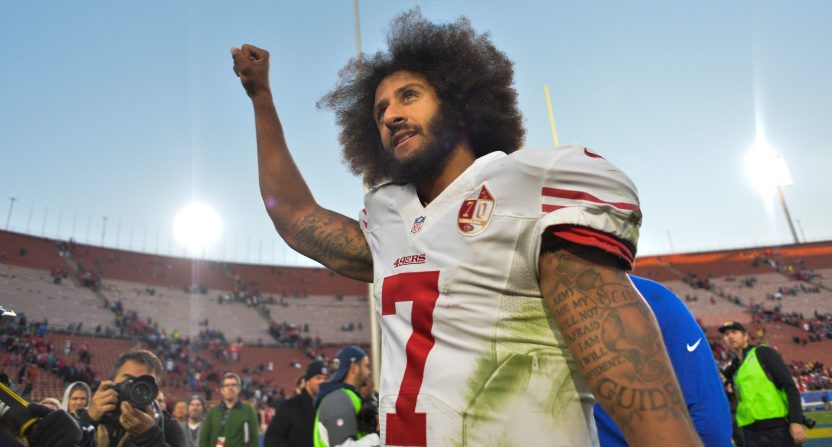 Thursday, former NFL quarterback Colin Kaepernick posted a video of himself with the caption “still working” as he hopes to be able to return to the league for the first time since 2006 following national anthem protests that made him a firestorm of attention.

Adam Schefter followed up the tweet by saying Kaepernick is reportedly in “the best shape of his life” and still eyeing a return to the NFL.

Certainly, the odds are very much against Kaepernick ever playing in the NFL again for a multitude of reasons. And anyone saying that the door is closed on him is probably correct. However, given the desperate need that so many NFL franchises currently have for a dependable signal-caller, that’s not going to stop people from speculating about him getting a tryout just to kick the tires and see if he truly does still have what it takes.

One NFL team that has come up a bunch since the video was posted is the Seattle Seahawks. Not only do they find themselves in need of a new QB after trading long-time starter Russell Wilson to the Denver Broncos, but they were the last team to give him a legitimate shot.

Seahawks head coach Pete Carroll said in 2020 that he had “regret” about not signing Kaepernick after he left the San Francisco 49ers. The team had their chance in 2018 but they reportedly canceled a workout with him when he refused to promise he wouldn’t kneel during the national anthem.

So now the Seahawks can sign Colin Kaepernick?
Pete Carroll in 2020: "I didn't see him as a backup quarterback and I didn't want to put him in that situation with Russ. It just didn't feel like it would fit right…But there's a lot of time here. We'll see what happens."

Carroll is still the head coach and he’s in need of a veteran quarterback. If he ever wanted to make good on those regrets, now would be the time. It’s certainly something that people have discussed on social media, especially at a time when the franchise is rebuilding and could use a steady hand.

Five years ago the @Seahawks strongly considered signing @Kaepernick7. They ultimately chose not to, reasoning that his potential popularity in the locker room could feel threatening to Russell Wilson. Now Kaepernick says he's in shape & Seattle has no incumbent QB. What now?

A rebuilding Seahawks team with Colin Kaepernick under center is the perfect storm of upside and fun and I won't hear otherwise.

The Seahawks showed interest in Kaepernick after he last played in 2016 and they now have a QB vacancy 🤔 https://t.co/ZQMgns4YQE

If the Seahawks were willing to give Kaep a chance to work out and prove himself, it might lead to a firestorm of controversy and pushback, but it might also be the exact solution they need on the field as well.

The team has also said to have an interest in Deshaun Watson, who brings an entirely different set of baggage with him. If they ended up going that direction instead, it sure does send a message, intentional or not.