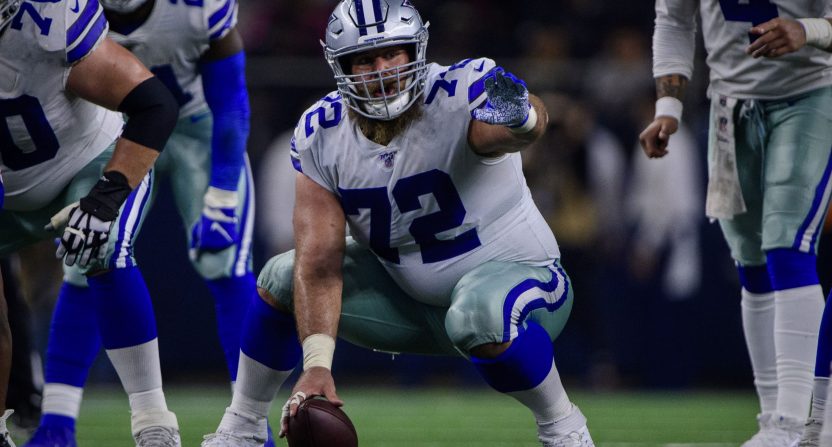 The recent trend of “early” retirements in the NFL continues, with Dallas Cowboys center Travis Frederick announcing his retirement at the age of 29.

Frederick tweeted the announcement on Monday in detail, citing an inability — in his opinion — to not be able to perform at his highest level. He also mentioned the physical and mental battle after being diagnosed with Guillain-Barré syndrome, which led to him missing the 2018 season.

“After much consideration, discussion, and reflection, I have decided to retire from football. This was not an easy decision. I entered the league at 22 years old, unsure of where life would lead. I since have married, welcomed two beautiful, healthy children into this world, and achieved professional levels of which I could have never dreamed.

Playing football has given me many amazing things. I had the good fortune to play on very successful teams, participate in Pro Bowls, and even be named All-Pro. I have been surrounded by not only elite level athletes and coaches, but elite level men. I have learned from and worked aside some of the game’s best players and coaches. Surprisingly, what I learned from them on the field paled in comparison to what I learned off the field: specifically, how to be an impactful member of the community, reliable teammate, and devoted family man.

I started a journey almost two years ago that completely blindsided me. When I developed Guillian-Barré Syndrome, I did not know how to handle things. I was scared. That experience forced me to reevaluate my life priorities. I spent much of that year thinking about both the past and future. I realized how fortunate I was to play a game for a living. I realized how fortunate I was to make friends and become teammates with some great men. Most of all, I realized the importance of my family and how much I want to be there for their peaks and valleys as they were for me.

Football is risky. Each day, players go to work knowing this could be their last day playing. Facing the potential end of my career because of my illness forced me to imagine life after football. I had to prepare for my career potentially ending. Some players fear life when it no longer revolves around football; the moment one stops playing the sport to which one’s identity and dreams have been tied to for 20 years. After months of contemplation, I not only accepted that moment, but I also, surprisingly found myself welcoming the moment. I was ready for the next stage of my life; however, the competitor in me would not accept going out without returning to the field.

I made my return to the field, played well overall, and was selected to the Pro Bowl, but it was a difficult year for me. Each day I faced a struggle: I could no longer perform at my highest level. Playing “well” is not what I expect of myself and is not what my teammates deserve. Because of this, I know my days as a football player are done. I am proud of what I have accomplished in my career, and I walk away with my head held high.

I thank the Jones family, the entire Cowboys organization, and my teammates for allowing me to go on this wild ride. I am very lucky to have played my entire career for and with the greatest sports franchise and fanbase in the world. I cannot express my gratitude enough for the support and opportunity over the last 7 years. I thank my family and friends for their support and for enduring my crazy schedule. Most of all, I thank my wife, Kaylee, for her unending support and belief in me. She handled the NFL craziness with beauty and grace. No one gives enough credit to the significant others in the NFL.

I am so thankful for the last 7 years; however, I look forward to the next chapter of life. Kaylee and I will continue to make a positive impact on the Dallas community which has given us so much. Best of luck to the 2020 Dallas Cowboys and the franchise in the future.

Frederick was selected to the Pro Bowl five times over the six seasons he played, including 2019. The University of Wisconsin product was also an All-Pro selection selection in 2016. He’s been the most valuable center in the NFL since 2003 according to Pro Football Focus’ WAR metric.

Travis Frederick has announced his retirement from the NFL

Frederick: most valuable C in football since 2013 according to PFF WAR pic.twitter.com/nXrInZ5X6S

a statement from Jerry Jones on Frederick’s retirement: pic.twitter.com/owsauwOnnG

Frederick retiring also counts as an $11.3 million cap hit for Dallas, and leaves them with a big hole to fill on the offensive line (a team strength over the past few years).

But the business side of this and what it means for the Cowboys is secondary to what is best for Frederick. Kudos to Frederick for walking away on his own terms and recognizing his skill level isn’t what he expects of himself.