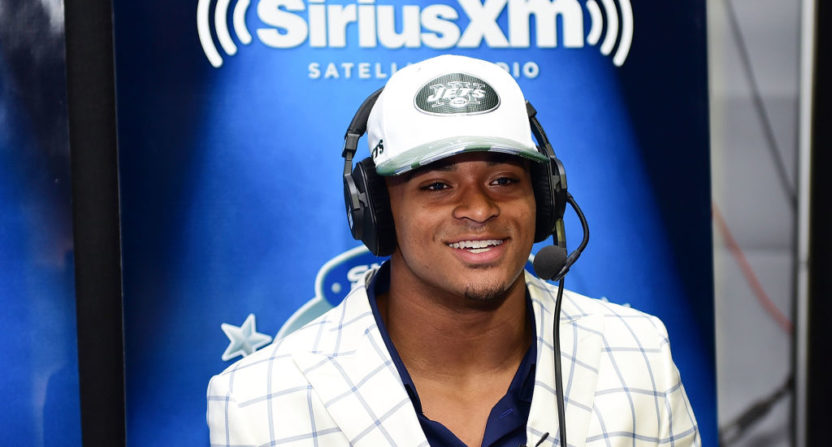 Jets rookie Jamal Adams has come under fire for a shocking and insensitive comment. With commissioner Roger Goodell sitting next to him on a panel, Adams called a football field the “perfect place to die.” And the fans in attendance cheered.

"If I had a perfect place to die, I would die on the field" — Jamal Adams of the Jets pic.twitter.com/yEpIkJZoWj

To make matters worse, Goodell tried to downplay the remark by saying the average NFL player lives five years longer than the average non-NFL player, even describing life as an NFL player as “healthier.”

Roger Goodell disputed the study that shows 110 of 111 former NFL players have CTE, but instead believes NFL players are getting healthier. pic.twitter.com/HjbjgmIkRg

Now a new voice has joined the conversation. Keana McMahon, the ex-wife of former Steeler lineman Justin Strzelczyk, said Adams “doesn’t know what’s coming.” Strzelczyk, who was diagnosed with CTE, died in 2004 when he intentionally drove his car into oncoming traffic on the New York State Thruway.

As someone who’s witnessed the effects of CTE first-hand, McMahon was understandably appalled at what Adams said. From the NY Daily News:

“I don’t even know what to say. This guy (Adams) doesn’t know what’s coming down the pipeline. He has no idea what dealing with someone who has CTE is like.”

McMahon says while she was married to Strzelczyk for eight years, he suffered from mood swings and erratic behavior — common symptoms of CTE, which has been linked to individuals who sustain repetitive head trauma. She adds that the two children she had with Strzelczyk were at times scared of their father’s volatile behavior when they were younger. After Strzelczyk’s death, McMahon says her son, Justin Jr., and daughter, Sabrina, struggled emotionally, and that McMahon took Sabrina to therapy for years, as she battled suicidal thoughts.

“I bet my kids would want their father here. I know in my heart of hearts that Justin would have wanted to see his daughter get married someday or see his son graduate from college, not dying on a football field. To me (Adams) is sh—ing on Justin’s grave,” says McMahon.

While Adams was likely speaking rhetorically, that’s a dark quote to have with your name, especially right after a study showed 110 of 111 brains of former NFL players suffered CTE. Since then, we’ve seen Ben Roethlisberger consider retirement and 26-year-old Ravens lineman John Urschel actually retire, and Adams’ remark shows the NFL still has a long way to go in health and safety education.