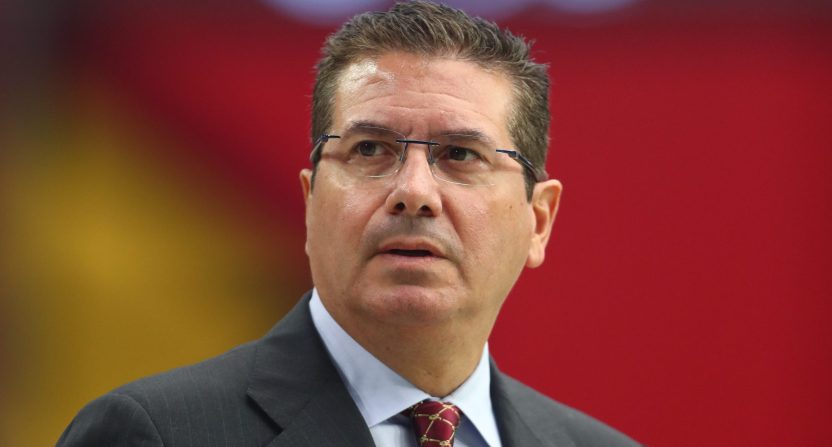 The NFL’s handling of widespread sexual harassment allegations against the franchise was so unsatisfying that the House Committee on Oversight and Reform decided to get involved. A few weeks back we learned the committee was also looking into allegations of financial improprieties involving the NFL franchise. Then we learned the committee received information alleging that the Commanders held onto ticket revenue that they should have shared with other NFL teams.

Tuesday, the Washington Post reported that Snyder “may have engaged in a troubling, long-running, and potentially unlawful pattern of financial conduct” according to a letter sent from the House Committee on Oversight and Reform to the Federal Trade Commission.

The reported allegation claims that Snyder may have withheld “as much as $5 million in refundable deposits from season ticket holders” and may have also hidden money that the franchise was required to share with all NFL owners.

The letter includes allegations made by Jason Friedman, a former vice president of sales and customer service who worked for the NFL franchise for over two decades. Friedman says the Commanders keep “two sets of books,” one of which exists to underreport ticket revenue to the NFL. He also claimed that the franchise would improperly attribute revenue to other events happening at FedEx Field, including college football games and concerts, in order to conceal it from the league.

“Given the Federal Trade Commission’s (FTC) authority to investigate unfair or deceptive business practices, we are providing the information and documents uncovered by the Committee for your review, to determine if the Commanders violated any provision of law enforced by FTC and whether further action is warranted,” the committee’s letter says, per WaPo. “We request that you take any other action you deem necessary to ensure that all funds are returned to their rightful owners and that those responsible are held accountable for their conduct.”

While Snyder has alleged to have done some pretty terrible things during his time as owner of the Washington franchise, withholding money from his fellow billionaire owners might end up being the most egregious allegation of all in their eyes. The NFL’s owners can put up with a lot when it comes to sexual harassment, mistreatment of players, racism, and homophobia. However, purposefully hiding money from them might just be the thing that gets them to act on removing Snyder from the league.

The latest report about Snyder certainly got the NFL world talking on social media.

I've always thought Snyder would survive because the NFL does NOT like to eat their own. ANY dirty laundry stinks up the entire joint. But if any of what is detailed here is proven true, he's out because he stole millions from his partners. https://t.co/dEyvgyF8C9

for all of the harm he's done and allowed to be done to dozens of women, of *course* the money will likely be the thing that leads him to facing any consequences.
of course. https://t.co/P9r86sGBPw

Seems like perhaps some jail time is in order https://t.co/1HbIoO1Um2

How big a deal do you all think this really is?? https://t.co/4pfRez09Py

We’ll see what comes of these latest allegations, be it from the NFL or the U.S. government.