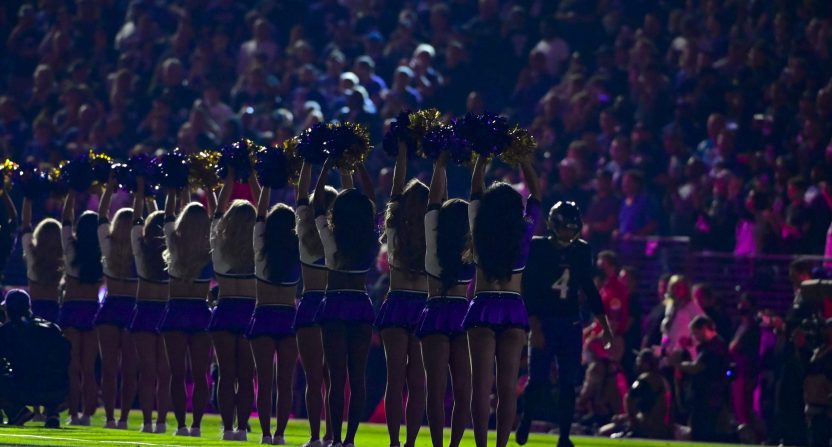 While Jon Gruden’s racist, homophobic, and misogynistic comments in his emails are capturing much of the public attention, the fact that photos of Washington Football Team cheerleaders posing topless were involved as well is reigniting the conversation about the way they were treated by WFT executives and how they are perceived around the league.

The photos, which were uncovered as part of a New York Times investigation in 2018 and further chronicled in a Washington Post article in 2020, include several team cheerleaders who were “required to be topless” for a photoshoot that was attended by “a contingent of sponsors and FedEx suite holders,” all of whom were men. Several of the cheerleaders were then instructed that they were required to serve as “personal escorts” for the male sponsors during an evening event.

News of the photos came as part of the email release that led to Gruden’s resignation as head coach of the Las Vegas Raiders, but it doesn’t appear that discussing them or coming up with solutions to safeguard cheerleaders in the future is on the docket for the NFL.

“Until cheerleaders are considered human enough in the sports realm to be unionized, these things will likely continue to be swept under the rug,” Former Washington Football Team cheerleader and team captain Candess Correll told InsideHook. “As a former NFL cheerleader of five years, I still am not privy to the full extent of the issues some of my peers have faced.”

That’s information that Lisa Banks, who represents nearly 40 former WFT employees, says the league doesn’t appear interested in sharing. She told USA Today that the NFL took several weeks to acknowledge a request from former female employees for more information on this investigation and that the league still has not agreed to a meeting.

“They all participated in this investigation in good faith, and it was hard for them to do it,” Banks said. “They expected at the end they’d (learn) what were the findings of the investigation and what are you going to do about it so they’d know it would have some meaning. They got nothing.

The NFL is going into prevent defense to make sure any information they don’t want out stays hidden. That’s why there’s no written report by the independent investigator, which is different from almost all similar investigations the league undertakes. The presumption is that the findings could severely damage WFT owner Dan Snyder, and would open the door to similar investigations into other NFL owners.

The pressure is mounting in the court of public opinion, for what it’s worth. We’ll see if that ends up pushing the NFL to release more, or for the very least, for someone in the NFL to leak more info than the league is willing to do on its own.