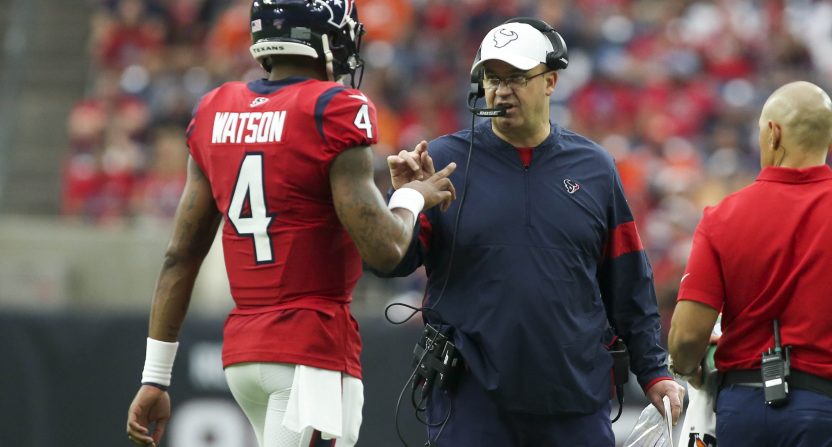 Every workplace has one. You know, the guy who keeps failing up. Exhibit A in the NFL is Bill O’Brien. He has amassed an uncommon amount of power despite doing little to earn that responsibility.

O’Brien (52-44, two playoff wins in 6 seasons) has been a mediocre coach and an even worse general manager for the Houston Texans. But perhaps we’re being too harsh. At least O’Brien didn’t trade Deshaun Watson for Enron stock. Watson agreed to a four-year extension with the Texans that will keep him under contract through the 2025. His average salary of $39 million per year is second to only Patrick Mahomes ($45 million).

This deal puts additional pressure on O’Brien, who’s signed through 2022. O’Brien the GM must build the right roster for O’Brien the coach. If not, O’Brien might be fired from both jobs. Teams usually don’t keep coaches around on an expiring contract. They don’t want a lame duck, and will either extend them or fire them. So, O’Brien probably has 2020 and 2021 to show he can deliver a Super Bowl contender.

Watson isn’t Mahomes or Lamar Jackson, both MVPs. But it will be a disappointment if Watson doesn’t at least get to the AFC Championship Game under O’Brien.

The NFL season’s opener between the Houston Texans and the Kansas City Chiefs on Thursday should sound familiar. It will be a rematch of last season’s divisional round playoff game in which the Texans blew a 24-0 lead in a 51-31 defeat at Arrowhead Stadium.

Ahead 21-0, O’Brien decided to kick a field goal instead of going for it on 4th-and-1 from the Kansas City 13. He also called for a fake punt on 4th-and-5 from his own 31-yard line that failed. Two decisions with disastrous results.

The collapse had some wondering about the future of O’Brien. Guess what? Soon after that embarrassment, the Texans doubled down on O’Brien by making him the permanent general manager. He had been serving in that role on interim basis following the firing Brian Gaine in June 2019.

What has O’Brien done with this power? He traded away one of his best players in wide receiver DeAndre Hopkins to the Arizona Cardinals for running back David Johnson, a 2020 second-round pick, a 2021 fourth-round pick. That trade looked even worse after the Minnesota Vikings got a first-rounder for Stefon Diggs in a deal that sent the wide receiver to Buffalo.

When it comes to bad O’Brien trades, that’s not all. He dealt away a second-round pick to the Los Angeles Rams for wide receiver Brandin Cooks, who’s coming off his worst season and is possibly a concussion away from his career ending.

There’s one more head-scratcher. O’Brien gave left tackle Laremy Tunsil a record-setting 3-year, $66 million deal. Tunsil is a good player and it’s important to protect Watson, but that contract made him the NFL’s highest-paid offensive lineman. Pro Football Focus ranked Tunsil as the 11th-best tackle in the league.

This is the same Tunsil that O’Brien traded for last summer when he sent a pair of first-round draft choices to the Miami Dolphins. It’s one thing to deal a pair for No.1s for an established star like Khalil Mack or Jamal Adams. It’s another when you do it for a guy who hadn’t even made it to the Pro Bowl (Tunsil was a Pro Bowler for the Texans last season). But Tunsil’s good season came at a cost because the Texans could have worked out a contract extension during the trade that would’ve been far cheaper than what they wound up paying.

The net result from these moves: Houston didn’t have a first-round pick this year. They won’t have a first or second next year. Barring a trade, their next first-round selection will be in 2022. Next season they’re projected to have the sixth-least amount of cap space ($9.7 million over). Also bear in mind that because of loss revenue due to COVID-19, next year’s salary cap is likely to go down (It will be at least $175 million, as compared to this year’s $198.2 million.).

This is the Bill O’Brien experience.

There are only two NFL coaches who are also their own general manager: Bill Belichick in New England and O’Brien at Houston. Belichick has earned that control over two decades with six Super Bowl titles and very few mistakes. The Patriots don’t overpay for anyone. Heck, their starting quarterback Cam Newton signed a one-year deal is worth up to $7.5 million with incentives. He’s the best bargain in the league. Belichick also doesn’t mortgage the future.

O’Brien overpaid his left tackle and dealt away picks. He’d better be right. Not only for Watson’s sake. But for his own.