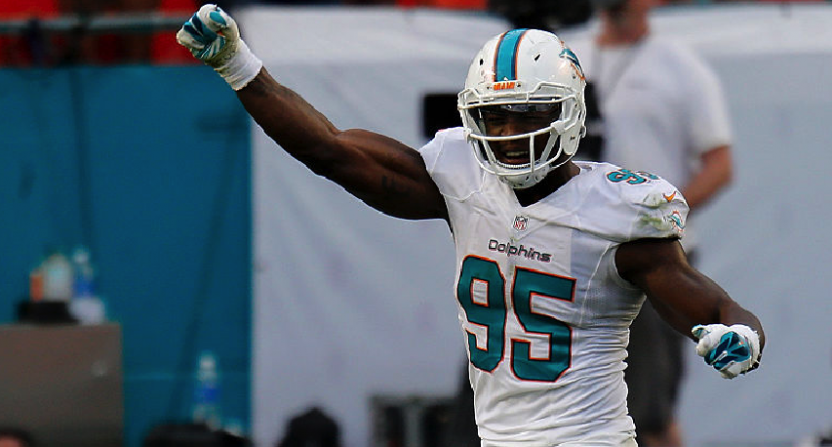 “We think he’s an outstanding talent, has tremendous versatility. He’s a great kid. We just think the world of the player and what he’s capable of doing. He’s got tremendous upside.”

Those were the words uttered by former Miami Dolphins general manager Jeff Ireland back in 2013 during the team’s introductory press conference for their top draft pick, Oregon defensive end Dion Jordan. Fast forward to today and Jordan has been suspended numerous times for failed drug tests and has not even come close to living up to the expectations that came with being a top five NFL Draft selection.

In 26 career games with the Dolphins, Jordan racked up a total of 46 tackles and just three sacks. Last March, Miami decided to part ways with their disappointing pass rusher.

Following his release, some wondered if Jordan’s shot at a career in professional football was all but over. However, less than two weeks after the Dolphins showed him the door, the defensive end was brought aboard by the Seattle Seahawks.

Here’s a couple angles of Cam Newton getting sacked by Dion Jordan. Carroll is all about speed and athleticism. pic.twitter.com/2TmfLXL6SL

If Jordan fails to make the Seahawks roster this year, his chances in the NFL are likely over. But if he somehow pulls it together and finds a way to make an impact for Seattle in 2017, then the Seahawks’ front office will look like a bunch of geniuses (again…).

During the times that he was on the field for Miami, Jordan mostly lined up as the team’s right defensive end. If this were to continue with the Seahawks he would be competing for the spot currently manned by Avril.

Avril is 31 years old and coming off a season in which he finished with a career-high 11.5 sacks. He has two years remaining on his contract, but Seattle can cut him in 2018 and only have a measly $500,000 count against their salary cap.

If Jordan is going to take away some of Avril’s playing time, he definitely has his work cut out for him. In the past six seasons, Avril has only sat on the sidelines once during the regular season.

Due to his size (6-foot-6, 248 pounds) and quickness (4.6 40-yard dash time), the Seahawks could opt to use Jordan more as a pass-rushing linebacker. It is not a position he is accustomed to, but it may be his ticket to being on an NFL roster for the 2017 season.

Even if Jordan is able to pull it together and succeed on the field, one more drug test failure and he could be out of the league for good.

Before getting reinstated by the league last year, Jordan talked to USA Today about how he planned to take advantage of his chance at getting back out on the field.

“I’m not about to waste it. I can’t waste it. And I (expletive) love doing it. Who doesn’t love running out in front of 30,000-plus fans and you get that rush?

I just want to play football.”

In the interview, Jordan also mentioned how he has not experimented with any illegal drugs since 2014.

So with his partying days apparently behind him, will he be able to finally focus on becoming a successful NFL player? It may not happen immediately, but it seems like Jordan is finally on the right path to accomplishing what once seemed like a simple task.