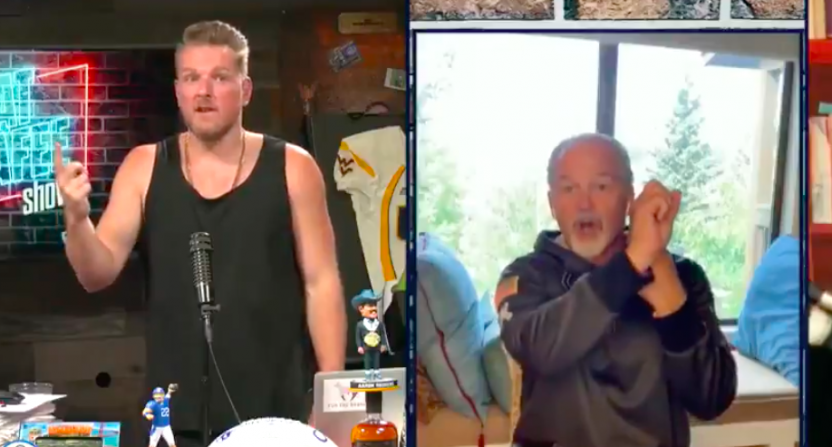 Urban Meyer finally met with all of the players on the Jacksonville Jaguars on Wednesday to apologize for the “distraction” caused by photos and videos that went viral over the weekend. While the jury is still out on whether or not Meyer will be able to earn back the trust of team ownership or the players, there are plenty of opinions out there about what he should have done.

Former Indianapolis Colts head coach Chuck Pagano appeared on The Pat McAfee Show on Wednesday and he didn’t mince words about Meyer’s actions, saying that he’s not sure how he could possibly even walk into the building on Monday following that weekend.

“Forget, ‘I wanted to eat dinner here, family, right across the street, pictures …’ No,” Pagano said on the Pat McAfee show of Meyer’s public statements. “You go in (to the team) and own that. Go in and own that s***. Tell the guys, ‘I f’ed up big time.’

“(He should have said,) ‘I don’t know how I’m going to get your trust back because I’m telling you, ‘Don’t do this, don’t do that,’ especially with COVID going on. No one is talking about that, putting yourself in this situation. Go in and own it and hope, time will heal all wounds, win some games and earn these guys’ trust back. But I don’t know how I could walk into that building.”

Pagano added that he always told his players there are five things that could “get you sideways” on weekends before or after games, including alcohol, drugs, firearms, women, and “nothing good happens after midnight.”

“A lot of those things were broken (by Meyer),” Pagano said.

"There was 5 things we always mentioned after Thursday games & Urban Meyer broke almost ALL of em.. he just HAS to own it & hope that time will heal all wounds" ~Chuck Pagano #PatMcAfeeShowLIVE pic.twitter.com/SdRAzAF88g

Pagano coached the Colts for five seasons and worked as an assistant coach for many more years. So he certainly knows a thing or two about how to work in the NFL for a long time. Urban Meyer certainly has quite the pedigree on the field too but for his sake, he’ll heed the lessons noted here.