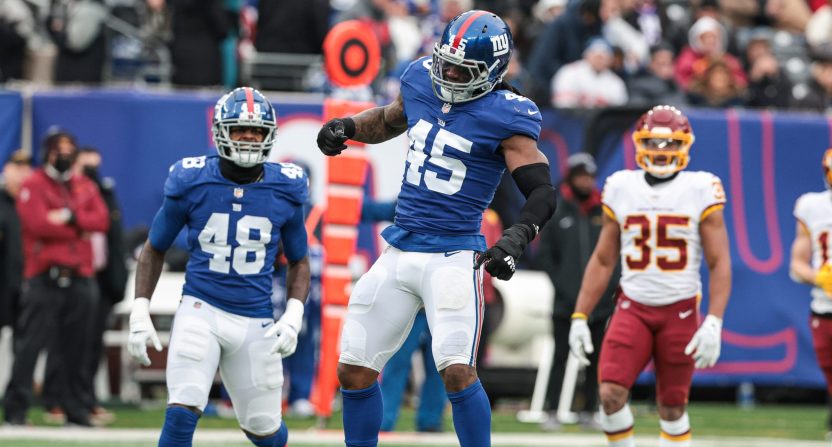 The New York Giants are bringing back a veteran defender to bolster their linebacker corps. Jaylon Smith, who spent part of the 2021 season with the Giants, is returning to New York.

On Monday, Smith’s agent, Doug Hendrickson, announced on Twitter that Smith had signed with the Giants.

Let’s go get it- @thejaylonsmith @Giants best is yet to come!

Beat writer Art Stapleton reported that he was signed to the Giants practice squad.

Giants are signing Jaylon Smith to the practice squad. https://t.co/pDvXjc72Ol

The news was generally met with positive feedback.

The #Giants are looking to get faster on inside, Jaylon Smith provides that.

#Giants held a big workout today for available players. Guessing Smith impressed out of that. https://t.co/TmW2ZAi3e1

Smith was selected by the Dallas Cowboys out of Notre Dame in the second round of the 2016 Draft. He missed all of the 2016 season with an injury but played in every game from 2017-2020, starting every game for the Cowboys from 2018 onward. In 2019, Smith recorded 142 tackles, 2.5 sacks, and one interception, making the Pro Bowl.

New York has been one of the NFL’s biggest surprises through the first two weeks of the 2022 season, starting 2-0. Smith’s new team will be in action against one of his old ones in Week 3. The Giants will host the Cowboys on Monday Night Football.