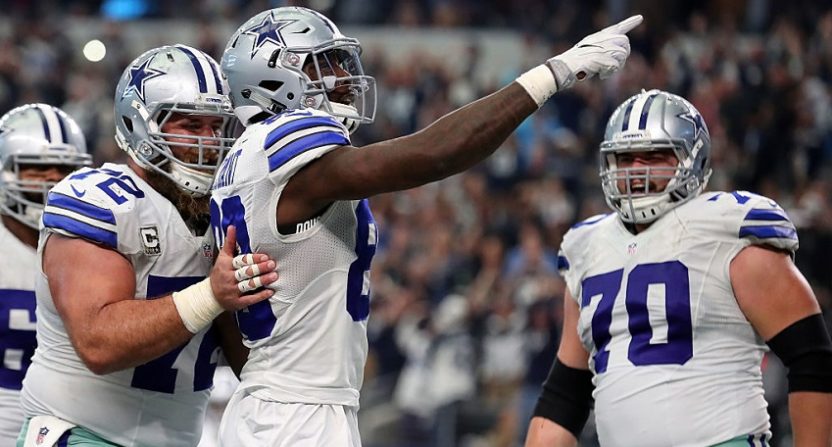 Heading into the 2016 NFL season, the forecast did not look too pleasing for the Dallas Cowboys. The top two quarterbacks on their depth chart (Tony Romo and Kellen Moore) were injured and the Cowboys were forced to start rookie Dak Prescott under center to begin the year.

Dallas started the season with a one-point loss to the rival New York Giants and it seemed like the franchise was gearing toward yet another disappointing year.

The Cowboys and their rookie duo of Prescott and running back Ezekiel Elliot led the team to 11 wins in their first 12 games. Dallas finished the regular season with a 13-3 record and later fell victim to an upset in the divisional round of the playoffs, courtesy of the Green Bay Packers.

As the 2017 season inches closer and closer, many have already been predicting the Cowboys to achieve a similar type of success that they experienced last year, if not more.

However, there are reasons to be skeptical about Dallas having a second straight winning season this year. The team has come up short with expectations in the recent past, so Cowboys fans may want to hold off this year on betting their life savings on the team winning the Super Bowl.

First, in order for Dallas to have their upcoming season be deemed successful, they will at least have to end 2017 with a winning record for the second straight year — something that the franchise has not accomplished since 2009.

Also, last season was only the Cowboys’ second with a winning record in Jason Garrett’s six years as the team’s head coach. Another season of 8-8 or worse and Jerry Jones would have likely given Garrett the boot last year.

After being successful in 2016, Dallas will now be back in the national television spotlight for a disgusting amount of time (six primetime games, including Thanksgiving). Will their young players like Prescott and Elliott be able to handle the pressure of the light being shined on them a little more in 2017?

The Cowboys’ opponents this season will most likely be game-planning to stop Elliott each week and force Prescott to beat them with his arm. Is the young quarterback capable of putting a team on his shoulders?

Injuries were not a real problem for Dallas last year (not counting Romo, sorry) and that has not been something of the norm for this team recently. Before the 2016 season, a number of key players missed significant portions of games over the years, including linebacker Sean Lee, cornerback Orlando Scandrick, and wide receiver Dez Bryant.

If the Cowboys have any type of Super Bowl aspirations in 2017, they will have to improve their 26th-ranked pass defense from a season ago. Especially since they will be facing off against a number of talented quarterbacks this year, including Matt Ryan, Derek Carr, Philip Rivers, and Aaron Rodgers.

Everyone should know pretty early in the season if Dallas is going to have a good year or not. Four of their first seven games are on the road and they include match-ups with the New York Giants, Denver Broncos, Green Bay Packers, and Arizona Cardinals. The Cowboys getting off to a bad start would not be too surprising, based on the first half of their 2017 schedule.

If Dallas does end up getting off to a less than impressive start to the year, getting back on their feet may be a hard task also. Their last three opponents of the season are the Oakland Raiders, Seattle Seahawks, and Philadelphia Eagles — and two of those games are on the road (yikes).

Even some of the Cowboys’ so-called “easier games” in 2017 could be difficult too. Teams like the Los Angeles Rams and San Francisco 49ers will likely be pulling out all the stops in an effort to say that they upset Dallas during the 2017 season.

As much as the Cowboys may have going for them this year according to some, they also have many obstacles to overcome as well.

Will Prescott and Elliott continue to lead Dallas into a new era of success for the franchise? Or will they just continue down the same unsatisfying path that the team has been following for the past decade?