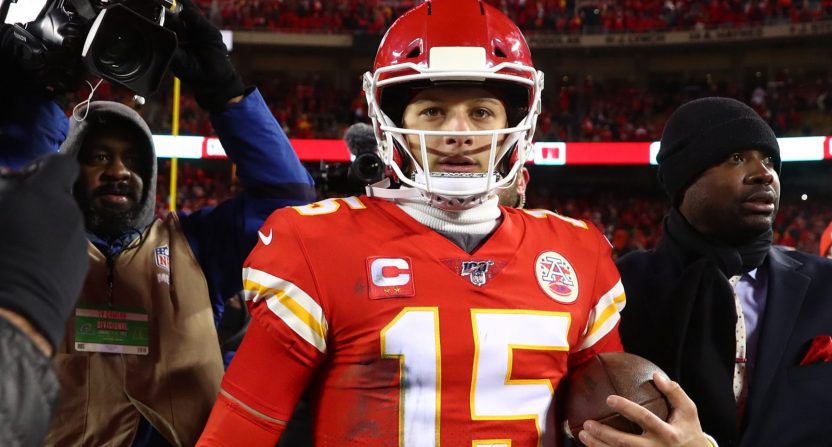 Barring a shocking development, one of the following four starting quarterbacks will capture the Vince Lombardi Trophy at Super Bowl LIV, which will forever alter that victor’s legacy.

How might a Super Bowl win change things for those representing their teams at the game’s most important position entering the final four? Let’s break it down.

With a shocking championship this year, some would begin to view Tannehill as a superstar who finally bloomed eight years after he was a top-10 pick in the 2012 NFL Draft. He had an up-and-down seven-year run with the Miami Dolphins, but the talent’s there. The guy put together the fourth-highest-rated season in NFL history this year, so if he completes a playoff run through Foxborough, Baltimore, Arrowhead, and then the 49ers or Packers, many would consider him an immediate star at the age of 31.

But some would still wonder if this was a fluke, especially since Tannehill and the Titans wouldn’t be close to alive right now if not for the dominant performances they’ve been getting from running back Derrick Henry. Nick Foles, who owns the third-highest single-season passer rating in NFL history and has a Super Bowl MVP on his résumé, still doesn’t look like a franchise quarterback. Some will compare Tannehill to Foles, who coincidentally came from the same draft class.

By becoming the second-youngest quarterback to win a Super Bowl, Mahomes — who was already the youngest player ever to win MVP — would officially be off to the most decorated start in NFL history. Imagine being a two-time Pro Bowler, an MVP, and a Super Bowl MVP before turning 25? Even if he just wins but doesn’t win the MVP on Feb. 2, Mahomes would be locked in as the face of the NFL for years to come.

We like to compare Mahomes to Michael Jordan because it feels like we’re watching a Jordan-type player rise in the NFL. But Jordan wasn’t an MVP until his fourth season, and he didn’t win his first championship until Year 7.

This is a big one. Rodgers is already a Hall of Famer with two MVP awards and a Super Bowl victory on his résumé, but in order to be considered the best of all-time, he’ll need to join the 12-man club of quarterbacks with multiple Super Bowl victories. In fact, with two wins in the next three weeks, Rodgers would become just the fourth quarterback in league history with two MVPs and two Super Bowl rings.

Rodgers will never be stuck in a category with Dan Marino, Jim Kelly and Fran Tarkenton, but it’s ridiculous that he’s been to only one Super Bowl in 12 seasons as an NFL starter. The highest-rated passer in NFL history needs more team success, and at age 36 this might be one of his last chances to establish himself as a top-tier legend.

Winning a Super Bowl with only 26 career regular-season starts under your belt would of course be a big friggin’ deal. But with his legacy still so fresh, Garoppolo — like Tannehill — would simply become the 33rd Super Bowl-winning starting quarterback in NFL history. That alone isn’t worthy of utter legendary status, unless of course you win MVP and break some records or something. And that’s a little less likely considering the makeup of the ground-and-pound, defensively-focused 49ers.

So it’s more about how Garoppolo wins it. Just ask Trent Dilfer.