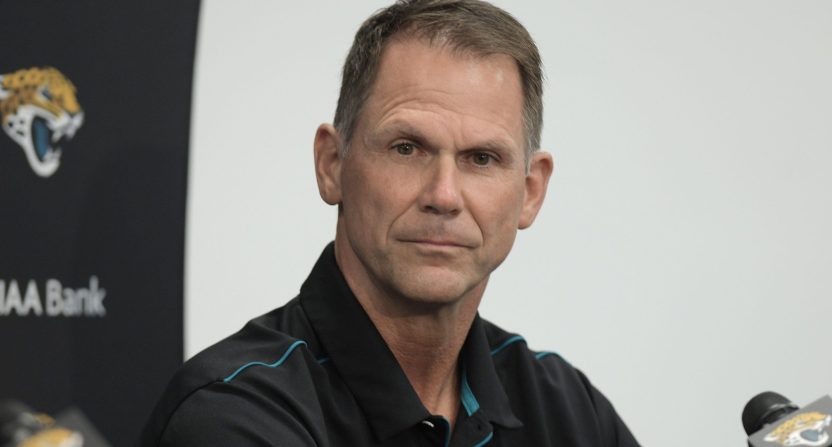 It’s been made abundantly clear that Jacksonville Jaguars would love nothing more than to see general manager Trent Baalke leave the organization.

While Urban Meyer was the focus of their ire during most of the season, Jags fans were shocked to learn that Baalke would not only keep his job but also have a hand in picking Meyer’s successor. So offended by his continued employment, Jacksonville fans dressed up as clowns in protest of Baalke during the season-ending game. Despite winning that game, the Jaguars clinched the top pick in the NFL Draft for the second-consecutive season, which might seem positive if not for the fact that they don’t expect Baalke to be able to know how to turn their situation into something better.

Baalke, who is no stranger to being a part of failed coaching experiments, doesn’t have a great track record. And that may have come to a head in this coaching search as candidate Byron Leftwich reportedly told the Jaguars that he would only take the job if Baalke was fired. True or not, that doesn’t appear to have happened and it doesn’t appear as though Baalke is going anywhere.

Mark Long, who covers the Jaguars for the AP, revealed the latest potential twist in his strange saga. According to Long, there’s a rumor circulating that Baalke is actually trying to hire some kind of assistant GM in order to make room for him to be more hands-on with the Jaguars players.

Rumor at the Senior Bowl: Jaguars GM Trent Baalke was looking (maybe even tampering) to hire someone to take on an assistant GM role to handle day-to-day operations, which would allow Baalke — wait for it — to be more hands-on with players on the field

It’s a bit unclear what that means but, reading between the lines, it sounds like Baalke wants to be part of the gameday decision-making process, which might just send Jaguars fans over the edge. And when you look at the reactions to this rumor, you can see why.

Trevor Lawrence is about to get ruined like an Enterprise luxury rental https://t.co/cu2Tku4Xcj

The Jaguars are like chicken soup for my bruised and battered football soul https://t.co/tJARlITtXu

"I still think about the day that it was the Giants game and we’re playing Cover-3, and he came up to me and he was like Jimmie, ‘You don’t know how to play Cover-3?’

This is why nobody wants this job, man. I told yall in not so many words. Mark stays crushing this. https://t.co/s6bjqckb4o

Get Trevor Lawrence out of there please https://t.co/mHXEGrNGoF

No wonder Byron Leftwich said hell to the naw in working with him https://t.co/98tmGHaLXv

Unless the Jaguars buck history and trends, they’re likely in for another rough season. And if Baalke is going to involve himself even more, then he’s putting himself directly in the line of fire for when things go wrong. Perhaps that’s the best solution that Jacksonville fans have. It might not sound good, but, then again, not much does with the Jacksonville Jaguars.