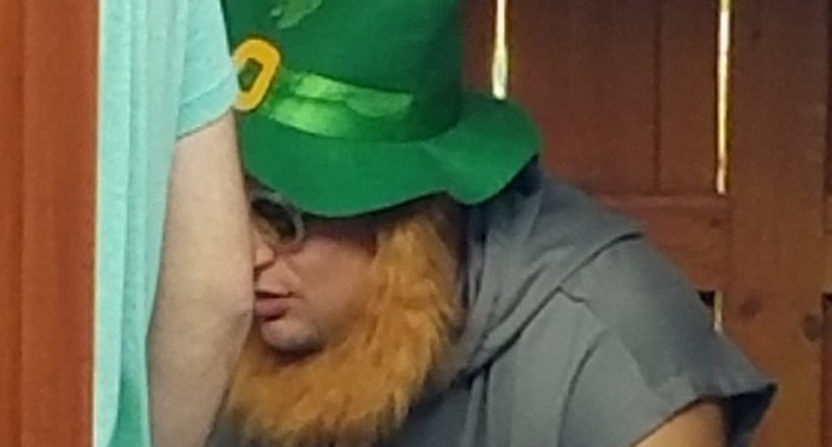 Sometimes, stories come from places you wouldn’t expect. The latest example there is from CBS Sports NFL writer John Breech, whose bachelor party was at a bar (Germantown Depot) in Nashville on Saturday, which also happened to be St. Patrick’s Day. And New England Patriots’ TE Rob Gronkowski just happened to be in that bar, dressed as a leprechaun. That led to amazing journalism:

After about five minutes at the bar, my brother turns to me and says, “Am I drunk or does that giant leprechaun over there look like Rob Gronkowski?”

Let me just say that if you ever see a 6-foot-6 guy wearing a cut-off hoodie with athletic shorts and a leprechaun costume, there is a 100-percent chance that it’s Rob Gronkowski.

Obviously, if you see Gronk dressed as a leprechaun on St. Patrick’s Day at your bachelor party, you have to take at least one picture, so I took one picture.

I think Rob Gronkowski just crashed my bachelor party in disguise. Not sure if he's going to retire, but said he could be playing for the "69ers" next season. I love my job. I love Gronk. #Patriots pic.twitter.com/ySWLHhjuJN

Oh, and Breech got some help from his dad with some hard-hitting journalism, in an attempt to figure out if Gronk had further thoughts about retirement:

Gronk still hasn’t said what he’s going to do yet, so obviously, I had to ask. The only problem with that plan was that there was a 30 percent chance I was going to slur at least one word. At that point, my dad shows up and says, “You know what, I’ll go talk to him,” which made sense because my dad was one of two guys in our party of nine who wasn’t drinking.

Also, my dad (Jim Breech) spent 14 seasons in the NFL and he’ll generally talk to guys if he sees an NFL player around, so that’s what he did with Gronk. They talked for about five minutes. At the end of the conversation, my dad mentioned that I was in the media and then asked him an on-the-record question about his retirement plans.

First, Gronk said he hasn’t decided what he’s going to do. He then followed that up by giving the most Gronk answer ever: “I might play for the 69ers.”

If a team called the 69ers ever did come into existence, Gronk (well known for his fondness for the number) would be the natural first signing. And perhaps the coach and general manager as well. But there isn’t one at the moment, so we’ll have to continue wondering what Gronk’s future holds. We do all now know that he was hanging out in a Nashville bar dressed as a leprechaun on St. Patrick’s Day, though, and the world is better for this information. It’s not quite as memorable as Gronk’s touchdown spike at a wedding, but it’s not bad. And congrats to Breech for playing through some tough journalism conditions here, with a little family help.