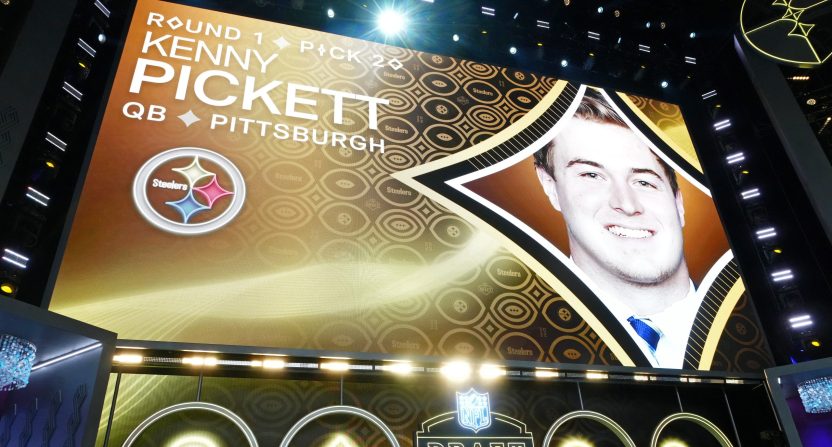 It took longer than normal but the first quarterback was finally selected at No. 20, with Pittsburgh signal-caller Kenny Pickett.

Pickett will not be going far. In fact, his home stadium will remain the same, as he was drafted by the Pittsburgh Steelers. He was emotional upon getting drafted.

An emotional Kenny Pickett is staying in Pittsburgh. 🙌@kennypickett10 | @steelers

Between the selection itself and Pickett’s reaction to it, the response to Pittsburgh’s decision was generally positive.

Kenny Pickett will be a GREAT quarterback. The Steelers will go to Super Bowls again.

This is a night we will remember forever.

No idea how Kenny Pickett will do, but that was a pretty cool moment.

This dude has already won over the city of Pittsburgh and now gets to put on the black and gold. Considering who was available I love it, absolutely love it. Now let’s have some cold ones. https://t.co/xyLmeX1GLY

this reaction is awesome. tough not to root for kenny pickett. https://t.co/pyiSeQyTJq

I love everything about this https://t.co/hw9Hf6JaPD

Yes. As a Pitt alum and a Steeler devoted, I am excited. https://t.co/aXzAX4LX6i

The feeling wasn’t unanimous, though. Other draft observers felt that Pickett should not be selected with Liberty quarterback Malik Willis on the board.

First QB off the board. Almost makes me feel bad seeing the young man's reaction and I'm sure the people around Pittsburgh will love this. But taking him (a mid-day 2prospect for me) over Malik is mind-blowing to me. 🤨#NFLDraft #2022NFLDraft #DraftTwitter #NFLTwitter #HereWeGo https://t.co/GK0FZswTgZ

Damnit! I don’t know how to feel about the @steelers selecting Pickett. I mean, I know he can play. But I kept hearing about this kid, Willis. So did they take Pickett because he’s better or because he’s home-grown? Damnit, I’m concerned. I’m concerned!!!

There are some reasons to doubt Pickett. The size of his hands were seen as an issue heading into the draft. Though, to be fair, if the small hands didn’t bother him in Pittsburgh at college, it’s less likely to be an issue at the same stadium in the NFL.

He also showed off his legs — sometimes in controversial fashion.

Here's the replay of the fake slide from Kenny Pickett: pic.twitter.com/70fa2pezkY

The first quarterback being taken at No. 20 is the lowest since the 49ers took Virginia’s Jim Druckenmiller No. 26 in the 1997 NFL Draft.

Pickett is the first quarterback the Steelers have drafted in the first round since 2004, when they drafted Ben Roethlisberger.