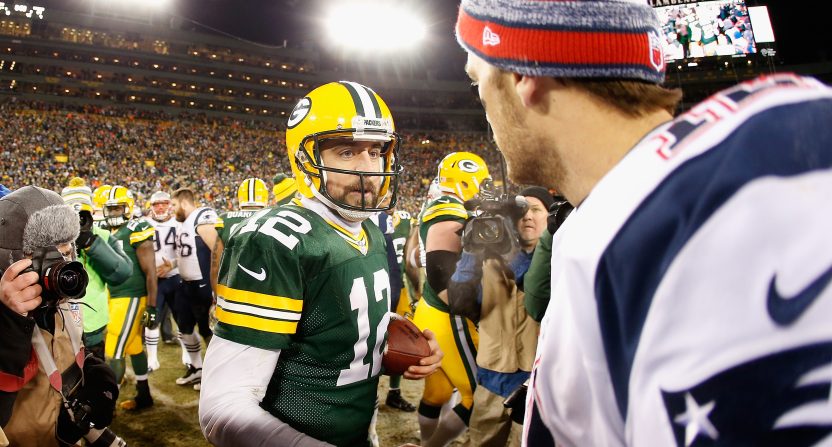 Kurt Warner is a Hall of Fame quarterback with two NFL MVPs, multiple Super Bowl appearances, and a league championship to his name. So he knows a thing or two about what it takes to be the best in the NFL (he’s even got an autobiographical movie to show for it).

While Warner has retired, contemporaries like Tom Brady and Aaron Rodgers are still playing and doing so at a high level. So much so that they’re among the top quarterbacks you’d want to consider if you were trying to win a Super Bowl in 2022. The question is, which one would you choose if you had to pick one of them? The ageless wonder who has seven Super Bowls to his name or the 38-year-old with a Super Bowl ring and a penchant for riling up the “woke mob.”

If it were up to Warner, he’d have to go with the old guy, naturally. He explained why on First Take on Tuesday morning.

“This season, or last season, or the last 20 seasons, I’m only taking one guy,” said Warner. “I’m taking the best quarterback to ever play the game. We could make any debate we want about Aaron Rodgers and how great he is and how talented he is. But I’m taking the guy that, in the biggest moment, always plays his best football and that’s Tom Brady.

“To still be doing it at this age, this well…I remember when I was playing I was always felt like I got better every year because I understood the game more. That’s exactly what it looks like with Tom Brady. He’s not losing anything physically and he just gets better and better with his feel for the game. So this, to me, is a no-brainer. As great as Aaron Rodgers and plenty of other quarterbacks are, you take the guy who finds a way in the biggest moment to make that play. To have that big game gene. I will take Tom Brady all day, every day, twice on Sunday.”

It’s hard to argue with Warner on this, given that Brady led the Tampa Bay Buccaneers to a Super Bowl championship last year and has them in contention to go back again this year. Even if the Green Bay Packers and Arizona Cardinals look like better overall teams, are you truly going to bet against Tom Brady once the playoffs start? Probably not.

Let’s just hope Rodgers doesn’t see this. We know how he feels about being critiqued, even lightly.